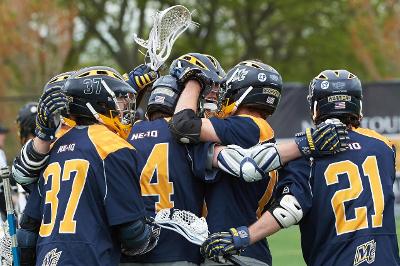 The Merrimack men’s lacrosse team has been one of the most successful sports on campus the past handful of years with the team being in the NE-10 playoffs on a yearly basis and adding five NE-10 championship appearances.

This season has been more of the same with the Warriors holding a 9-1 overall record and a 7-1 record in NE-10 play. As the standings show the Warriors stand in third in the conference and are sitting in fifth place nationally.

“They’re a well-rounded group. It shows what kind of guys they are and what kind of character they have, where we are now is apart of the hard work they put in,” said head coach Mike Morgan.

Coming into this season the team was slated to finish third according to the coaches poll. With a good mix of youth and upperclassmen leadership the team has enjoyed much success and have continued where they’ve left off in recent years.

“To be honest I knew we were going to be talented, and I knew the guys would work hard and it just comes down to guys taking a role a doing it well,” Morgan explained. “I think the standard here is to be competing for Conference championships and National championships.”

The teams defense has been just as good with only two games that were decided by two goals or fewer. This stout defensive core has been able to shut down the offensive attack of many of their opponents this season.

“Both sides of the ball have had their games. It has to be a team effort, you’re never going to win with one group being great and the other group being average,” Morgan said. “They push each other in practice so there’s a bit of a rivalry with who’s got the better unit. It definitely comes out in the games.”

Sophomore Max Allen has provided much of the offense for the Warriors. Allen has scored 36 goals while adding two assists. The New Jersey native is the leading goal scorer on the team and is leading the conference in goals as well.

“He came in last year and showed some success early, and then showed he was a freshman and still learning the college game down the stretch,” explained Morgan. This year he came in hungry to get that spot back and he’s been great.”

With the way this team has been winning games it’s easy to get too high or even too low after a tough loss against rival Le Moyne just last week. It’s been a matter of staying focused and taking things one practice and game at a time that has helped this team tremendously.

Entering the final part of the month it’ll be important for Merrimack to continue getting wins and solidify their postseason position in the conference. Once the postseason comes around it’ll be in their hands as to how deep they can go.

“Keeping focus is obviously one, make sure we’re getting healthy and getting some guys back that were playing knicked up,” said Morgan. “Starting to game plan for these games closer, and continue what we’re doing in practice and just staying focused. I think the sky’s the limit and they’re going to control how far they go.”