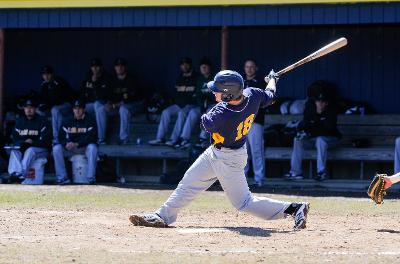 Spring break might have meant a relaxing, stress-free time, surrounded by a tropical setting, but for Merrimack’s baseball team their paradise was on the diamond. The Warriors opened up their season in Fort Pierce, Florida with a double header against Nyack.

The Warriors started their season on a roll beating Nyack in both games. Merrimack’s starting pitchers for the first two games were seniors Tim Cashman, and Joe Carnevale, respectively. Both players have proved in seasons past that they are two ace-worthy pitchers, and in Florida they proved it once again. In game one Cashman threw a dominant seven innings, only allowing one Nyack hit, no walks, and nine strikeouts. Not to be outdone, in game two, Carnevale, who also threw seven strong innings, gave up only five hits, no walks, along with eight Ks. Both left the games with wins. Over the next two games, it was up to the young guns, Sophomore Perry Kulaga, and Freshman P.J. Browne to get it done on the mound against Willmington. Both showed up, accumulating 14 innings pitched, 4 runs allowed, 3 walks, and 8 strikeouts, leading Merrimack to a perfect 4-0 start.

It’s not just the pitching on Merrimack that has the Warriors looking like a threat in the NE-10, but the offense as well. Over the first 11 games the Warriors offense has posted a respectable .272 team batting average along with 61 runs. Leading the streaky offense over the first 11 games are junior captains, Frank Crinella, and Matt Brown. Crinella leads the team in hits with (16), RBI (10), and batting average with an impressive .400 average. Brown, the designated hitter, is living up to his title, posting a .353 average, and 8 RBI. Both players also have a homerun each, reminding division foes who not to pitch to when the game is on the line.

“I believe our offense is one of the strongest in our conference. We have a relentless line up, with a lot of guys who have had success in previous years. In the beginning of the trip we were antsy and anxious to get on the field but toward the end we all settled in and we’re able to be successful. Even in the games we lost, overall our offense performed pretty well. We hit bombs”, said the assured captain when asked about the team’s offense on the trip.

With NE-10 conference games around the corner, the Warriors seek to continue their streak with the hot bats, and remain dominant on the mound. Both the pitching and the line up look better than ever, all the team needs to do is live up to their potential. With a new coaching staff, promising freshman players, and confident captains, this year could be something special for the Warriors; at least that’s what junior captain Pat Florence thinks.

“Overall it was a solid trip. We’ve proved we have what it takes. If we fight for each other every game we will make a great run this year”, said Florence.