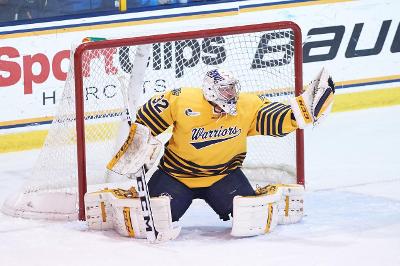 The Merrimack hockey team has enjoyed much success in this ‘14-’15 campaign. Winning 14 games so far this season  after only recording eight just a year ago. The man behind much of the success this year is goaltender Rasmus Tirronen.

The senior netminder has had his best season to date and has been the backbone of the Warriors defense and has given them a chance to win every game he has started in this season. His team owns a 14-13-3 record and has been nationally ranked for most of this season, something they haven’t done since the ’12-’13 season.

“We’ve started off better than we’ve had in the previous years. I think a lot of it came with having completely new captains that really brought the team together well,” said Tirronen. “Obviously we had a really good freshmen line and good freshmen in general that came in and gave us that boost that we needed.”

Personally, Tirronen has shown that he is one of the top netminders in Hockey East and the country. The Finland native has posted a 10-9-2 record and has a goals against average of 2.29 with a save percentage of .923 which are all career highs.

“For me personally this has been a pretty good year so far, hopefully I can keep it going,” Tirronen explained. “I’ve had a much better d-core this year and have been able to see a lot better.”

During his freshman season which he was ineligible, he learned a lot from former Merrimack standout Joe Cannata and added more to his game when he split time last season with Sam Marotta before establishing himself as the full-time starter between the pipes.

“I go back to my freshman year, I was ineligible but I got a tremendous amount of knowledge from Joe Cannata who was the starter at that point,” Tirronen said. “I tried to help him as much as possible while taking parts of his game and seeing how they work with my game.”

Summers are a really important time for any athlete. It’s a time to remain in top shape and a chance to improve some of the skills that will help you to better perform once the season comes around. This past summer was an important one for Tirronen. Going back home, he took the time to work with his goal-tending coach to sharpen and solidify his game.

“Summer is when you take the big steps. Especially for goalies the summer is huge,” he explained. “I wanted to do everything this summer to prepare myself for this season. I worked with my goalie coach back home and he helped me a lot.”

Just a few weeks ago at Lawler Rink, Rasmus Tirronen had the game of his college career making 51 saves in a 2-1 win over then 10th ranked UMass Lowell. Tirronen explained that he would rather face many shots through the course of the game as it helps him to stay sharp.

One of the strong suits of Merrimack’s game have been their penalty kill. Ranked 4th in the nation with a percentage of 89.3%, it’s helped quiet the power plays of their opponents and has helped lead them to victories. You could say the Warriors penalty kill starts with the goaltender but Rasmus would argue otherwise.

“I would argue it starts with coach Carr. He’s done a terrific job here and has been our penalty kill specialist. He knows what he wants and we just go out there and execute,” Tirronen said. “Guys are boxing out guys and letting me see shots and it works. It’s as simple as that.”

With the vast amount of freshmen that have entered the lineup, Tirronen has found a new friendship in fellow goalie Colin Delia. Bouncing new ideas and techniques at each other it’s helped them both become better goaltenders.

“It’s definitely a back-and-forth relationship. I think we’ve done a good job of adapting stuff from each other,” Tirronen explained. “He’s just a great guy and a good friend. He’s gonna carry this program for the next few years and I have no question in his ability.”

As the season comes to a close in the next two weeks it’s important for the Warriors to take as many points as they can to try and secure home ice advantage for the first round of the Hockey East playoffs.

“We need to get back to playing our game. Of course we want to get home ice for the first round of the playoffs. These games are hugely important for us,” said Tirronen. “I think if we get back to playing or game I think we’re in good contention to go as far as possible.”

As the senior goaltender plays out his final season, he has enjoyed his time playing in the navy and gold. Being able to get a rich education while playing in one of the top conferences in the country for college hockey, Rasmus Tirronen couldn’t ask for a better four years.

“I can’t say enough. It’s a great place. The school has been great for me and he same with the hockey team. I can’t thank the coaches enough for the opportunity to come here to play hockey and be a student,” Tirronen explained.