The Story Behind Sparky’s Shutdown

As students were returning from winter break, North Andover health inspectors were shutting down the campus cafeteria because of cockroaches and other “critical” issues.

The Beacon obtained the report filed by health inspectors in North Andover on Jan. 20. The report resulted in a shutdown of Sparky’s from Jan. 20 to Jan. 23 so the facility could be cleaned. The North Andover inspector found “critical violations” with the kitchen itself, “equipment and utensils,” and “pests.”

“Conditions exist that are an imminent threat to public health. Kitchen is to cease production, preparation, cooking or service of food to the public,” the report states.

The North Andover Health inspector found “30+” living and dead cockroaches under and on top of food equipment. The roaches were also found in cardboard boxes of fryer oil that were eventually discarded. 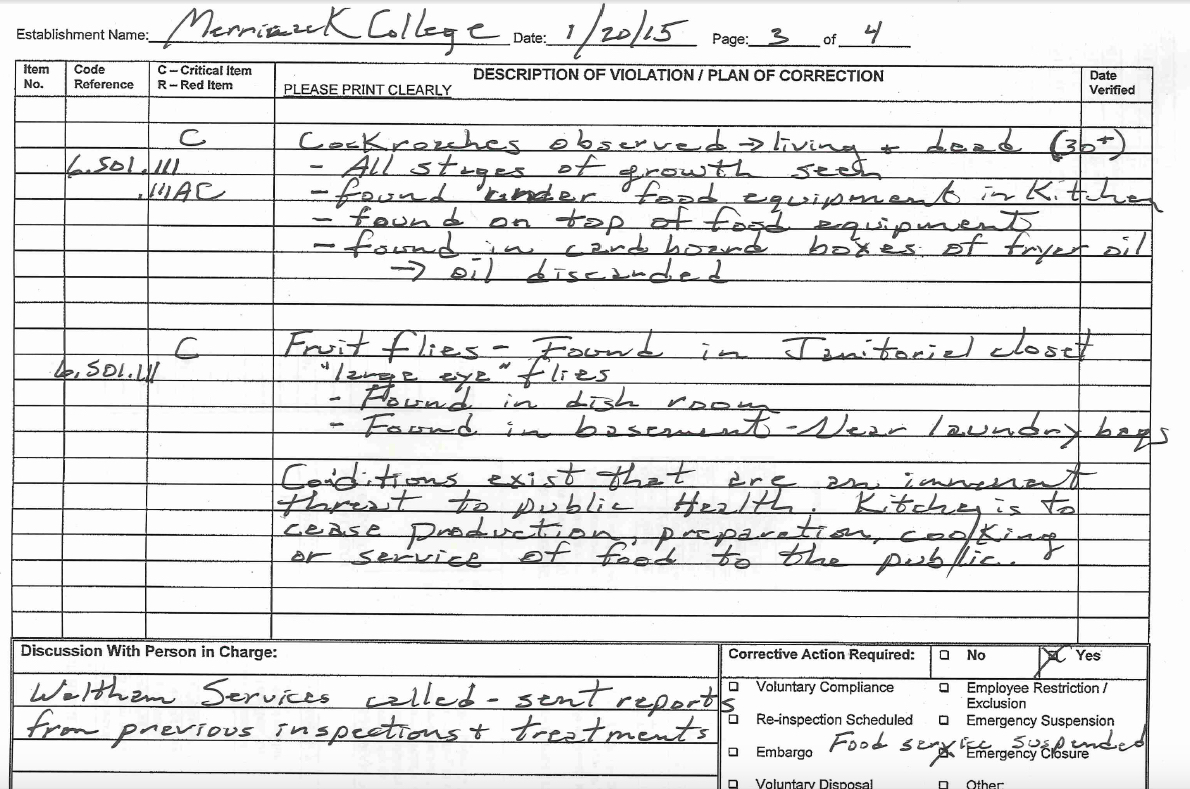 Among other issues discovered were problems with excess food build-up in drains, dirty carts, pooling water on dirty floors, and filth underneath the conveyor belt.

Several Sparky’s workers told The Beacon that Sodexo managers for Sparky’s, Michael Newmark and Ross Dahlstrom, were made aware of the issues with cockroaches in December. The workers, who asked to be anonymous, said they were told by managers when they saw cockroaches to “brush them away or kill them.”

Both Newmark and Dahlstrom have been transferred by Sodexo and were unable to be reached for comment.

The workers said during the inspection, cockroaches fled from grease traps removed from the flat top grill where eggs are scrambled every morning. The inspectors’ report noted problems with roaches in the traps.

Merrimack’s Associate Vice President of Communications James Chiavelli said this was the first time North Andover health inspectors found health violations, adding that every other inspection has resulted in a perfect score. He said Waltham Pest Control was brought in to take care of the roach infestation.

Students were notified of the Sparky’s closure on Jan. 20 by Merrimack Senior Vice President Jeffrey Doggett.

“Student safety and well-being remain the college’s paramount concern, and we assure the campus community there is and was no safety issue resulting from this,” Doggett wrote in his email.