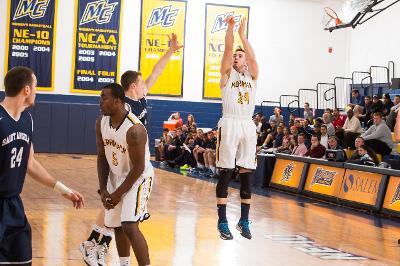 Basketball is back for the Warriors and even though they’re off to a 2-4 start, this young season looks promising. Freshman Kyle Howes has been named NE-10 Rookie of the Week.  The Maynard native has been a big contributor for the Warriors. The first four games Howes came off the bench, however Tuesday night he started his first game of his collegiate career. The 6’2 guard is averaging an impressive 22.8 minutes a game along with seven points per game. Last game against St. Anselm the Freshman dropped 14 points, not to mention a dominating 11 rebound performance. The rookie played a career high 35 minutes against St. A’s, shooting six of 12 from the field, mixing in two three-pointers.  Although the Warriors lost the game, Howes is a talented player with potential to strengthen his team on both sides of the ball. Now that we’re familiar with his game, lets get acquainted with the Rookie Of The Week.

Q: How old were you when you began playing basketball?

A: I’ve been playing every since i can remember but first started organized basketball in 3rd grade.

Q: What made you choose Merrimack?

A: Coach Hammel and the guys on the team were my biggest influence for me to choose MC. After playing with them i did not want to play with another team, but I also wanted to stay close to home so my family can watch me play.

Q: As a freshman, did you expect to get as much playing time as you are?

A: To be honest, no i did not. I expected it to take longer to work my way up.

Q: If you could pick four other NBA players to start a game with, who would they be?

A: I would choose Chris Paul, Lebron James, Kevin Garnett, and Kevin Durant.

Q: Can you dunk? If so how old were you when you first did?

A: I can dunk, my first dunk was my freshman year of high school.

Q: How does it feel to be named Rookie Of The Week?

A: Its an honor to be named rookie of the week, it feels good to have my hard work pay off and be recognized by the entire league.

Q: What are your expectations for the rest of the season?

A: I have high expectations for our team this year, once we really click as a team i think we have a chance to win the league.

A: I am a Civil Engineering Major

Q: If you weren’t playing basketball what other sport at Merrimack would you want to play?

A: I would play football. I played quarterback at Lawrence Academy and had offers to play college football.

Q: Who was your favorite player of all time?

A: My favorite player is Lebron.

Q: What is your favorite thing about Merrimack so far?

A: My favorite thing about Merrimack so far is how it’s a small school and everyone knows everybody. I grew up in a small town so coming here and having the same, small town feel is awesome.