Home > News > New Buildings on Campus: How will they affect us?

New Buildings on Campus: How will they affect us? 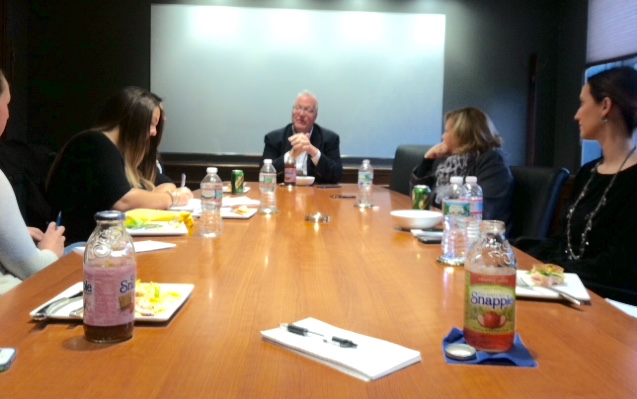 Merrimack has begun construction on yet another new building on campus. The Merrimack Beacon sat down with President Hopey and discussed these new changes and how they will affect us as students.

This building is set to house 350 students once complete. Next Fall, only the first half will be complete and it will contain 180 beds. But how will this new building affect current students? Will freshmen be allowed to live there? Is the Wi-Fi going to get worse because there will be even more students and devices on campus? How will this building affect parking? Will the college continue to build new residence halls and will they ever renovate older ones?

As far as who will be allowed to live in the new buildings, it is up to student life. President Christopher Hopey said that it is not up to him; students can communicate with residence life and student life regarding their thoughts on who should live in these new buildings. The college is looking to change the housing model away from the standard one of freshmen starting their academic careers living in Ash and Deegan and moving on to live in more desired buildings such as the apartments by their Senior year. Merrimack is also looking to join the higher education trend of affinity housing meaning that groups of students with common interests (such as honors or international students) can live together regardless of class year.

The Beacon also spoke with Sarah Hicks, the Director of Residence Life regarding these new buildings. She said, “In terms of room selection for next year, we have already started looking at what that process will look like and similar to past years will invite members of SGA and other students to provide input on the process before it is finalized”. Incoming freshmen may have a chance to live in the new buildings. If you want to let residence life know how you feel about who should live in the new buildings, they are open to it.

We do not have a housing problem here at Merrimack, Hopey said. The president told us that we currently have about 30 open beds on campus. The college has only planned to accept 180 additional students for next year. They did not plan on the 350, so there will be no cramming students into residence halls.

It is a well-known fact that Merrimack’s Wi-Fi has not been as strong this year as it has been in the past. Students have been complaining of inability to connect to the network and get fast, reliable Internet. In our last issue we discussed how IT is working to fix the problems that we have been faced with.

The Wi-Fi on campus is more accessible in the new dorms that were most recently built. The dorms that have been around longer have thicker walls, they’re made of brick and it is harder to get signal through. These dorms were built in the 1950’s and they were made using old technology. Some of them were built during the Cold War and there were no building materials available. That is why they are built the way that they are.

Merrimack uses a program called Meraki to run the wireless on campus. When President Hopey first took office there was no wireless Internet on campus. It was just four years ago that this campus became wireless. The president also informed The Beacon that it is not the number of students that affects the Wi-Fi; it is the number of devices connected. Students are bringing and using an average of 3-4 Wi-Fi devices now, as compared to 1-2 devices two years ago. In September 2012, 4,300 devices were being used on the MCStudent network. As of September 2014, 8,012 devices are being used on MCStudent. The President just spent $50,000 to improve the connection and create more hotspots on campus to double the bandwidth. They have put a deal in place with Verizon about putting a center on campus so that students will have more access points. In regards to the new buildings, the President and the administration hope that these changes will make the network strong enough to handle the increased number of students.

“We do not have a parking problem at Merrimack,” said President Hopey. Students assumed that there was an issue this year when they were charged $400 to park their cars on campus and for the first time, commuters had to pay for their stickers. The Beacon spoke with Jim Chiavelli who is the Associate Vice President of Communications and he told us that the administration realizes that parking is always limited to the spaces available. This year every senior and junior resident student who applied for a space received one, along with a majority of the sophomores who applied and all of the commuter students, faculty and staff. The college will continue to hold a lottery for permits for the number of available spaces, by class year, even as they continue to expand. They do also offer a 24-hour shuttle system to the commuter rail, shopping and entertainment venues.

This college spends $250,000 a year to give students the “privilege” of being able to park overnight, Hopey said. He said the school has to pay for things such as towing and plowing, etc. The thing is that someone has to pay for it. These fees are about fairness, he said. People on this campus are continuously moving. Instead of walking around this campus, students prefer to drive. Parking spaces will become much more available if resident students began walking places instead of driving, he said.

“The issue is not with the number of spaces available because the college has plenty of space,” said the president. Offices have been moved across the street into the plaza next to Fuddruckers and some students now live in the apartments at Royal Crest. These two things saved 150 spots on campus. The current construction is only occupying 30 spots. President Hopey told us that the college does intend to expand the lot upfront towards Elm Street.

In our meeting with the president, he gave us as much information as he could on what will be contained in the new buildings going up on campus. He said that there are three big needs on this campus. Merrimack needs about 8-10 classrooms that can hold 25-50 students. We also need additional dining and student entertainment space as well as student study space. The new residence halls will contain new labs, and a communications studio that will be open to communications students 24 hours a day, 7 days a week.

As far as renovations go, buildings that have been around since the 1950’s will eventually come down. President Hopey told us that buildings such as the townhouses and the apartments will be updated over time. He said, “The next generation of students that enter the college in four or five years will see a whole new set of dorms. They will see something entirely different than what someone who is graduating this Spring will see”.