Merrimack Hockey Off to Hot Start 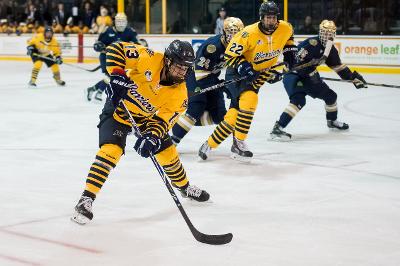 The Merrimack hockey team has been off to a good start to the ‘14-’15 campaign. Owning a 10-4-1 record overall with a 4-3 record in Hockey East, it’s looking like the troubles that plagued this team just a year ago are behind them. They are now ranked #18 in the country according to the new USCHO rankings.

“I think we’re resilient. With the influx of ten freshmen there’s a lot of life in the locker room,” said head coach Mark Dennehy. “We’ve gotten off to a good start and now it’s fun to come to the rink.”

Coming into this season the Warriors had a lot of new faces, 10 to be exact, with some being forced to play right away. The youth movement has paid off for this team. The offense has blossomed since the takeover with the freshmen combining for 49% of the teams offense. They have shown to already be one of the better recruited classes in recent years.

“The recruiting process itself makes it almost impossible to know what you’re getting,” Dennehy stated. “This is as close to batting 1.000 as we’ve been. This class is at the very least what we thought it was.”

One of the bright spots of the freshman core has been Brett Seney. Seney, the 18 year old, has come into being a dynamic playmaker for Merrimack. Scoring five goals a adding six assists for 14  points just 15 games into his rookie season which leads the team. His speed and great hockey sense have lead him to accomplish this feat as a young player in college hockey.

“Brett is a good player. He can play at a high speed,” Dennehy explained. “With Brett it all comes together. His brain, hands and feet are all moving at a high tempo, but they’re moving together.”

Seney has played on a line with two other freshman, Jace Hennig and Mathieu Tibbet. The trio has been a pleasant surprise to the Warriors team. They have combined for 13 goals and 30 points and have been great offensively and defensively with plus/minus of +14.

Special teams has been another key factor for Merrimack especially on the penalty kill. Clicking at 89.1% the Warriors have killed 57 of 64 penalties they have faced to date which ranks 3rd in Hockey East. Ben Bahe, Kyle Singleton, Justin Mansfield and Jonathan Lashyn have all been key contributors to the penalty kill.

“Coach Carr has done a great job with our penalty kill. We’ve got some guys who really know what they’re doing,” said Dennehy. “They’ve done a really good job of playing situations exactly how we want them to play. They’re courageous, and they’re smart.”

Another key to Merrimack’s defense has been goaltender Rasmus Tirronen. Tirronen has been one of the better goalies in Hockey East posting a 7-3-1 record with a .925 save percentage and a 1.78 goals against average. Going back home this summer and working on different parts of his game with his goaltending coach has done wonders for the senior netminder.

“He’s turned into the player we thought he would be,” explained Dennehy. “He wanted to come back and set the tone. H spent the summer training his but off and went to his old goalie coach back home and really tightened up hs game and has gotten off to a great start.”

There have been many challenges that the Merrimack hockey team has faced during this young season. Battling teams like Providence, Notre Dame and newly entered Uconn. The Warriors have measured up nicely to these Hockey East opponents.

“I think we’ve been able to go toe to toe with all of them,” explained Dennehy. “As much as we feel we can beat any team in our league, we also recognize that they can beat us too.”