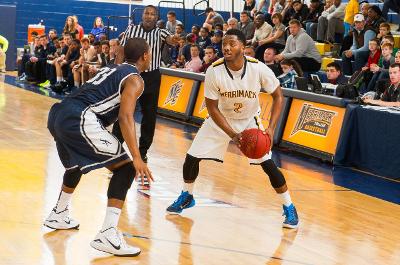 Through the first four games of the 2014-15 regular season, the Merrimack Men’s and Women’s basketball teams look eerily similar on paper. The men’s team holds a record of 2-4 and a 0-4 record in NE-10 play, while the women’s squad owns a 4-3 record with an even 2-2 NE-10 record.

The way they’ve been winning and losing their games have been similar as well. In their two wins, the men have a total margin of victory of +19 points, including a three-point upset over #14 Philadelphia University. They’ve also looked pretty good in their two losses, coming up just short in a 91-88 overtime loss to Stonehill and dropping their most recent game at Franklin Pierce, 76-71. Together, that puts the men’s margin of defeat at a mere -8 points, giving them a net rating of +11 on the year.

The women, on the other hand, have been absolutely blowing out their opponents in victories so far this season. A 77-57 win over Post combined with a 75-39 whooping of Goldey-Beacom gives the Lady Warriors a massive margin of victory of +56. And, like the men, the women haven’t exactly been destroyed in the games they’ve lost. A five-point loss to Stonehill in addition to a two-point loss at Franklin Pierce has the women’s margin of defeat at even smaller -7 points, giving them an enormous +51 net rating.

Had the ball bounced a different way in certain circumstances, both teams could have very easily been standing at 4-0 to begin the new campaign. But the season is young and there will be plenty of opportunities for both Merrimack basketball teams to get the proverbial ball rolling.