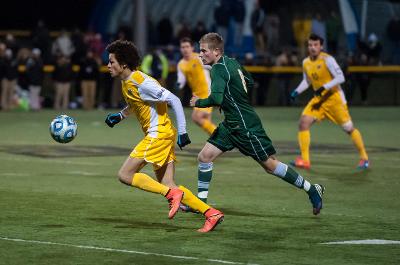 Merrimack College soccer has been a very successful team in the schools athletic history. In the last four seasons they have made it to two NCAA tournaments going all the way to the Sweet 16 this season until falling to rival LIU Post 2-0. The team ended the season with a record of 15-5-2.

“It was an outstanding year,” said head coach Tony Martone. “We accomplished a lot and had some great success.”

Once the conference tournament ended for Merrimack it was time for the Warriors to look for a chance at a possible tournament bid in the NCAA’s. Merrimack has made it to the tournament once before just two seasons ago. Coach Tony Martone had fun with it this time by pranking his team about their fate for a bid. He and his team were pleasantly surprised when they heard their name called as a #3 seed in the region.

“You never know what’s going to happen. Last year was disappointing. The players were anxious,” explained Martone. “Honestly, I pulled a prank on the players. They went in expecting the worst. It made it exciting when we were in. It was a special moment.”

As soon as the season started Martone believed his team could be at the top of the conference and country with the talent that they showed early on. They took the philosophy of taking the season one game at a time and that they would respect but wouldn’t fear any opponents.

“I liked what I saw in preseason. We were able to put things together. I knew we had a solid team and that we could be one of the best teams in the conference and country,” Martone said. “We took the season one game at a time and that we could beat any opponent if we executed a game plan. We respect but don’t fear anyone.”

The road wasn’t a very friendly place for Merrimack early on in the season. They picked it up at the end of the season winning six out of their last seven road games and ending the season with a 6-3-1 road record. They came together at the end of the year and were able to take tough road wins against tough opponents in the NCAA.

“The team kept gelling as the season progressed,” Martine stated. “The road is always a tougher especially against tough NCAA opponents. We had the right frame of mind and everyone was healthy.”

The graduating senior class has been one of, if not, the most successful classes that this program has seen. They were the class that was the first to bring them all of the way to the NCAA tournament for the first time. In their four years they brought the program to two NE-10 championships and to appearances in the NCAA tournament. The class has left a lasting legacy to the soccer program at Merrimack.

“The seniors have lead by example. As freshmen they elevated the program and then as sophomores they made it to the NCAA’s for the first time in school history,” explained Martone. “They’ve had a lot of special moments. They were one of the best classes to put on a Merrimack jersey.”

The team has gained a great deal of experience with going as far as they did in the NCAA’s. It was the furthest they’ve been in school history. Going into next season, the tournament bid the team had this season will help the young players know what it takes to get in that position. Being in the position the team was in this year it can put them a step ahead of other teams in the conference and country.

“Having the experience helps you prepare better. They have a taste and a feel for the excitement,” said Martone. “They were one of 45 teams to make the tournament and the players relished it.”