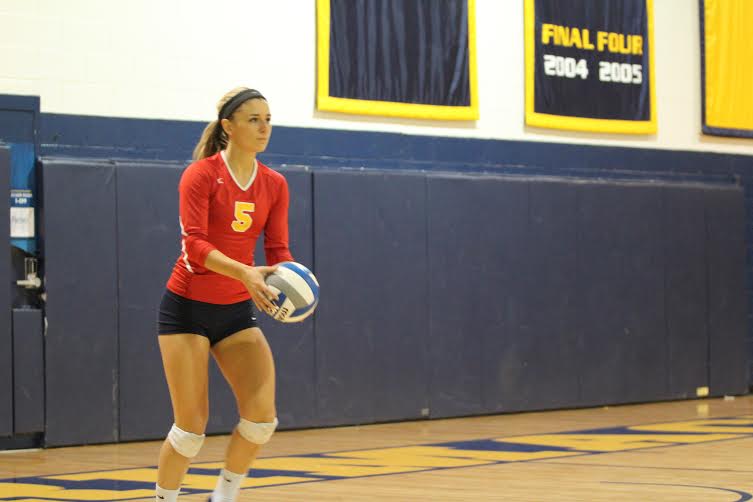 The Merrimack women’s volleyball team is off to a fast start with a big contribution from captain Madison Burke. The junior, California native, has been on a hot steak since the season has started and doesn’t seem like she is going to slow down. Burke was named the Fuddrucker’s Women’s Player of the Week after helping our Warriors start out with 2-0 record. Burke totaled 35 digs over one weekend as her team competed in a tri-match at Southern Connecticut State University. She finished with a match-high 17 digs against the Molloy College. She then continued her dominance on the court with an 18-dig performance against SCSU. She is ranked ninth in the NE 10 in digs per set with an average of 4.47. Now that we know who she is on the court, lets get to know who Burke is off it.

Q: How old were you when you started to show interest in Volleyball?

A: I was about 12 in 6th grade when I first started playing volleyball. I actually got cut from the basketball team in 7th grade so I started playing year round in club. Still hurts but it worked out for the best.

Q: What influenced your love for Volleyball?

A: I loved being part of a team and having that second family. Some of my best memories are from the sport and its always been my dream to be able to play at the college level.

Q: Was it a tough transition from living in the west coast to moving across the country to the east coast? If so why?

A: Yes it was a major culture shock in every way. I couldn’t understand my coach’s fast paced Boston accent for a while so I wasn’t really sure what I agreed to. The weather is crazy too.. I have been in snow before but every winter here I am like a kid in a candy store when it starts to fall. I think it’s the coolest thing ever.

Q: How did Merrimack end up being your school of choice, considering you are originally from California?

A: I was really interested in athletic training/ sports medicine and so this school was the perfect choice because of its great program.  I was considering staying in California but after visiting Boston I loved it and thought it would be great to experience a new part of the world while I am in school.

Q: What responsibilities do you need to take on as a captain this year?

A: This year we have two senior captains and myself so I try to lead by example and just serve my teammates the best I can. I like to have a calm and positive attitude so that I remain consistent while playing and help provide my teammates with confidence and encouragement when they are struggling. As a captain, it’s not about you. It’s about lifting up everyone else so that we can be successful as a team.

A: I am majoring in sports medicine.

Q: What is your most memorable moment in a Merrimack uniform?

A: Although making it to the NE-10 finals was pretty great, my favorite memory would be the playoff victory against Saint Rose. We played an amazing game and my cousin was there to support me. After we won I ran up and hugged him and I guess whoever was running the camera thought he was my boyfriend. Awkward.

Q: Do you have any sport idols?

A: Kerri Walsh, the beach volleyball Olympic champion. She came to one of my tournaments so I got to meet her. Life made.

Q: If you could play another sport, which would you choose?

A: I would really love to pick up curling.

Q: After a 2-0 start, do you believe this years team has the potential to surpass the success of last year’s team?

A: We only lost one player from last year and have a better overall record so far. I believe we could make it to the NCAA tournament this year as long as we play our game and continue to remain strong as a team.

Q: What is more challenging, playing indoors or outdoors (beach)?

A: Beach is definitely more challenging because you have to work a lot harder to be able to move quickly in the sand. It’s a great workout and a ton of fun but you’ll be dying after about 10 min if you’ve never played beach before.

Q: Would you rather play of the beach or on a court?

A: I love competing on a court but over summer I love to play beach more. I have a group of friends that drive out to Santa Cruz every week and play all day. It’s a good time.