Campus Police and Residence Life are fed up with the reckless and presumed drunken behaviors of Merrimack students taking place on campus over the weekends, however they are more concerned for the safety of the students.

“If a student is found throwing a bottle, they can and will be documented for this, as it is not only a violation but a definite danger to those in the surrounding areas,” said Lauren Daddona, area coordinator for O’Brien Hall and the Apartments/Office of Residence Life.

Throwing objects at another person is a serious problem, and even if it is a student’s first offence, expulsion is never ruled out, school officials said.

There isn’t any hesitation when it comes to weekend patrol by campus police. As soon as 1 a.m. hits, the blue lights turn on and Merrimack PD and Resident Advisors clear out the apartments. The 1 a.m. quiet hours don’t always take well as there are a few rambunctious students who rebel with bottle throwing and attitudes. This has been a more reoccurring issue on campus lately as RAs, police officers and fellow students are all subject to danger once an object is thrown in the air.

Extra police officers are generally on duty Thursday nights through Saturday nights to supervise the area of the St. Ann apartments.

“They’re out there to monitor the overall behavior of the crowd,” says Chief Michael DelGreco of the Merrimack Campus Police Department. DelGreco further explained that typically the students are compliant come 1 a.m, and can be cleared out within five or 10 minutes.

But he said it takes just one or two kids to throw something and put someone else in danger.

Kevin Sullivan, a Merrimack alum graduating in 2014 was a victim to a glass bottle. It was during his study abroad trip to Australia his senior year where he was struck over the head with a bottle. Sullivan was going to confront a strange man after he was harassing one of his friends that he was abroad with, and before he could get a word in edgewise, his life was forever changed. 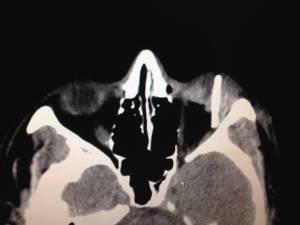 “People drunkenly do this not realizing the consequences of what throwing a glass bottle can do to someone,” he said. “People don’t realize that a glass bottle is actually a dangerous weapon and that it can seriously injure or even kill someone if struck hard enough. Someone throwing one at me caused me to lose vision in my left eye, and I’m lucky it wasn’t worse.”

Throwing these bottles, cans and other objects at peers and Merrimack staff is a serious danger. Students will face the Student Conduct Board and the Merrimack Police Department to see what punishment they could or will face. There is a criminal side to bottle throwing as well, and that is something all students should remember.

Tim O’Leary, Head Resident Advisor, spoke on behalf of the Student Government Association and Residential Life. He said “The SGA supports the College’s polices and has been working with the Police Department to improve campus safety.”

Students are encouraged to take pride in their campus, community and in each other. Also, speaking up when students see this kind of behavior is something that the faculty would like to enforce. Keeping this campus safe is something that Merrimack prides on and would like students to help with this process as well.