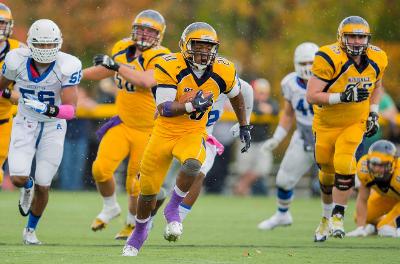 In any sport, one of the most common team goals you will hear of is the desire to improve as the season goes along. Whether that means winning more games or applying more resistance in losses, you essentially want to finish the year better than you were when you convened for the first practice. Unfortunately, that hasn’t been the case for the Merrimack football team. Since they began the year with a solid 2-3 record, the Warriors have dropped three of their last four games and are currently losers of their last three straight.

The skid began Homecoming Weekend when Assumption came to Martone-Mejail Field and defeated the Warriors by a final score of 41-13. Merrimack appeared to be in good shape at the half as they went to the locker room with a 13-10 lead. The second half was a different story, though, with the Warriors allowing the Greyhounds to score 31 unanswered points including a 24-point third quarter.

Head coach Dan Curran’s group experienced much of the same when they traveled to West Haven, Connecticut the following week. The Warriors took on New Haven at DellaCamera Stadium and were never really able to keep the game close other than the 14-7 deficit they faced heading into the second quarter. From there, the Chargers held Merrimack scoreless in both the second and third quarters while scoring 21 points of their own. The two sides then traded touchdowns, scoring one each, in the final frame. It wouldn’t matter. New Haven had already done enough earlier in the game to secure a 42-14 victory.

The Warriors admittedly looked better this past weekend when they hosted American International. Having lost their previous two contests by 28 points each, Merrimack nearly pulled off an upset over the NE-10’s first place team, coming up just short in a 24-21 loss. The game appeared to be out of hand early with Yellow Jackets sprinting out of the gates to a 21-0 halftime lead. American International got things started in the second half with a 21-yard field goal – giving them a 24-0 lead – before the Warriors ripped off 21 unanswered points over the course of the remainder of the third and fourth quarters. Merrimack pulled within three points when quarterback Nick Laspada found Justin Mount for a two-yard touchdown with just 1:38 left in the fourth. By then, though, it was too late. The Yellow Jackets hung on and handed Merrimack it’s sixth loss of the season, 24-21.

Currently sitting in eighth place in the Northeast-10 conference, the Warriors are extremely unlikely to have a shot at postseason play. However, they do have a chance to end of the season on a good note when they host Southern Connecticut State on Saturday, November 8th at 1:00pm. A win would give Merrimack a 4-6 record for the year, but a loss – obviously making them 3-7 – would mark the team’s worst win-loss record in the last eight years. Here’s hoping the Warriors can get the job done and build themselves some momentum heading into next season.