Home > News > Volleyball still has eye on the prize

Volleyball still has eye on the prize 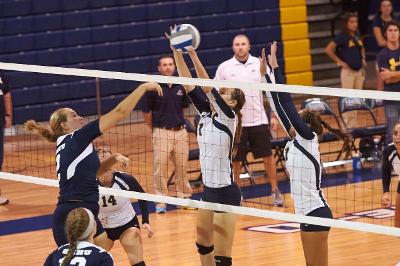 For the women that proudly make up the Merrimack College volleyball team, the road to an NE-10 Championship is a tough one, but it’s not impossible. Through the first sixteen games of the 2014 season, the Warriors find themselves sitting at 10-6 with a 4-4 record in conference play. To say that this is where the team envisioned it would be at this point before the year began would be quite the overstatement.

Luckily, seniors Corinne Gosselin and Aliya Rakhmetova understand that success isn’t something that can be achieved overnight. Sometimes, despite having the reputation for being one of the tougher teams in the NE-10, you have to go back to the drawing board.

“In the beginning of the year we were playing really well,” Gosselin, a middle hitter, said. “We have had some upsets this year that we are learning from. As a team, we came together and figured out what needs to change to better the rest of the season. We are taking it one game at a time and still have the confidence that we will continue to play well.”

Confidence is one thing that this team certainly doesn’t lack. Both Gosselin and Rahkmetova agree that the team’s number one goal entering the season was to finish in first place in the conference. Although they are currently sitting in seventh, the Warriors still have a good portion of their season still to be played.

“We still have eight games [left],” Rahkmetova, also a middle hitter, told The Beacon. “So that goal (finishing first in the NE-10) can’t be accomplished … yet.”

The fact that last year’s team remains largely in tact this season also inspires confidence, as that squad finished the 2013 campaign with a 9-5 conference record.

“Last year we graduated one senior,” explained Rahkmetova. “With three new members on the team we still have the ability to make it to and win the championship – and potentially make it to NCAA’s.” Rahkmetova was also quick to point out that the team has sped up their offense this year while working on getting consistent play from every position; both adjustments being key factors in their possible run to bigger and better things this season.

But, while it’s true that having confidence in both your game and game plan are vital to winning a championship, Gosselin and Rahkmetova realize that no matter how well everyone plays as individuals, it’s all about the team at the end of the day. “Volleyball isn’t an individual sport,” Gosselin stated. “We all need to be on our game in order to play well.” Rahkmetova echoed that sentiment in saying, “Each player has worked hard. We all have heart for the game and a common goal to win.”

It’s clear that this team sort of follows the belief that the whole is greater than the sum of its parts. Individual success and accolades are nice, but championships aren’t won by individuals. A cohesive unit – a team – wins them. That’s why, despite not being exactly where they’d like to be in the standings, Gosselin and Rahkmetova know that a first place finish in the conference and a trip to the NCAA’s are still within reach. They just have to remain confident. They have to remain selfless. Everything else will take care of itself.