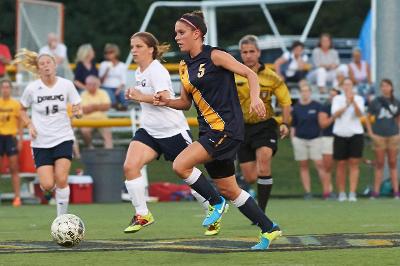 The Merrimack women’s soccer team has had an up and down 2014-15 season thus far. They started off their campaign with five wins in the month of September and have only won one game in the month of October. The Warriors hold a 6-7-2 record and a 2-7-2 record in NE-10 play which is good for 14th in the conference.

“It’s been a very tough season. We had so many injuries which created a lot of the problems,” said head coach Gabe Mejail. “We had a patchwork defense, basically. We player who were normal midfielders and forwards playing in the back and that creates a lot of problems.”

The roster has been one of the youngest in recent years with 20 underclassmen including 11 freshman. As you can see it’s been a year for a lot of learning of the college game with as many newcomers as this squad has in the lineup. The freshman have transitioned well with the play of college soccer but have struggled a little with the physicality that comes with playing in the NE-10.

“What they’ve had the most trouble with is the physicality of play,” Mejail explained. “Soccer wise they have transitioned well. Their very skilled and they understand the game and are tactically aware.”

“When you have more than a third of the team that are freshman it affects the whole group,” Mejail added.

Throughout the season the team has established their presence at home with a dominant 5-1-2 record making it hard for opposing teams to come into Martone-Mejail Field to earn a victory. However, the team hasn’t enjoyed the same success on the road posting a 1-6 record.

“We’ve only lost one home game and that was in overtime. There’s a certain comfort that the kids feel at home,” said Mejail. “We’ve always been good at home.”

“It hasen’t been one of our fortes. We’ve had trouble adjusting on the road,” explained Mejail on his teams poor road record. “It dosen’t seem to affect our intensity. We’ve had one bad road game against Pace but since then we have played well on the road but haven’t gotten the results.”

It’s safe to say that junior Jenna Savi has been the best player on the field for Merrimack. Savi has posted 19 points which ranks her sixth in the NE-10 and leads the team in scoring. She’s been a bright spot on a team that has struggled and has been the main source of offence for the Warriors.

“She’s having a very good year. She’s pretty much our playmaker and also a finisher,” Mejail said. “She’s not a big girl but she can handle the physicality. Her set-pieces are some of the best in the league. I would compare her to anyone in the league in that respect.”

Even though the season has been a rough one for the women’s soccer team there are some parts of the game that the team has excelled in including playing very well with the ball, and controlling play. The team, however, would like to see improvements with finishing once they have offensive zone opportunities.

“What we have done better than many teams in the past is playing with possesion. Controlling the ball and moving it around and getting it to the other end,” said Mejail. “Something that we have to improve on is when we get to the other end is do something with it.”

Coach Mejail and his squad have three games left on the season all of which are conference games and two out of the three games will take place at Martone-Mejail Field which could work in the Warriors favor with their dominant home record. Merrimack is taking it one game at a time in the final stretch in hopes of making it to the conference playoffs.

“Mathematically we’re still in it. If we go 4-0 we’ll finish .500 in the conference and have a good chance to make it to the playoffs,” Mejail said. “We’re going to just take it one game at a time and treat every game as a playoff game.”