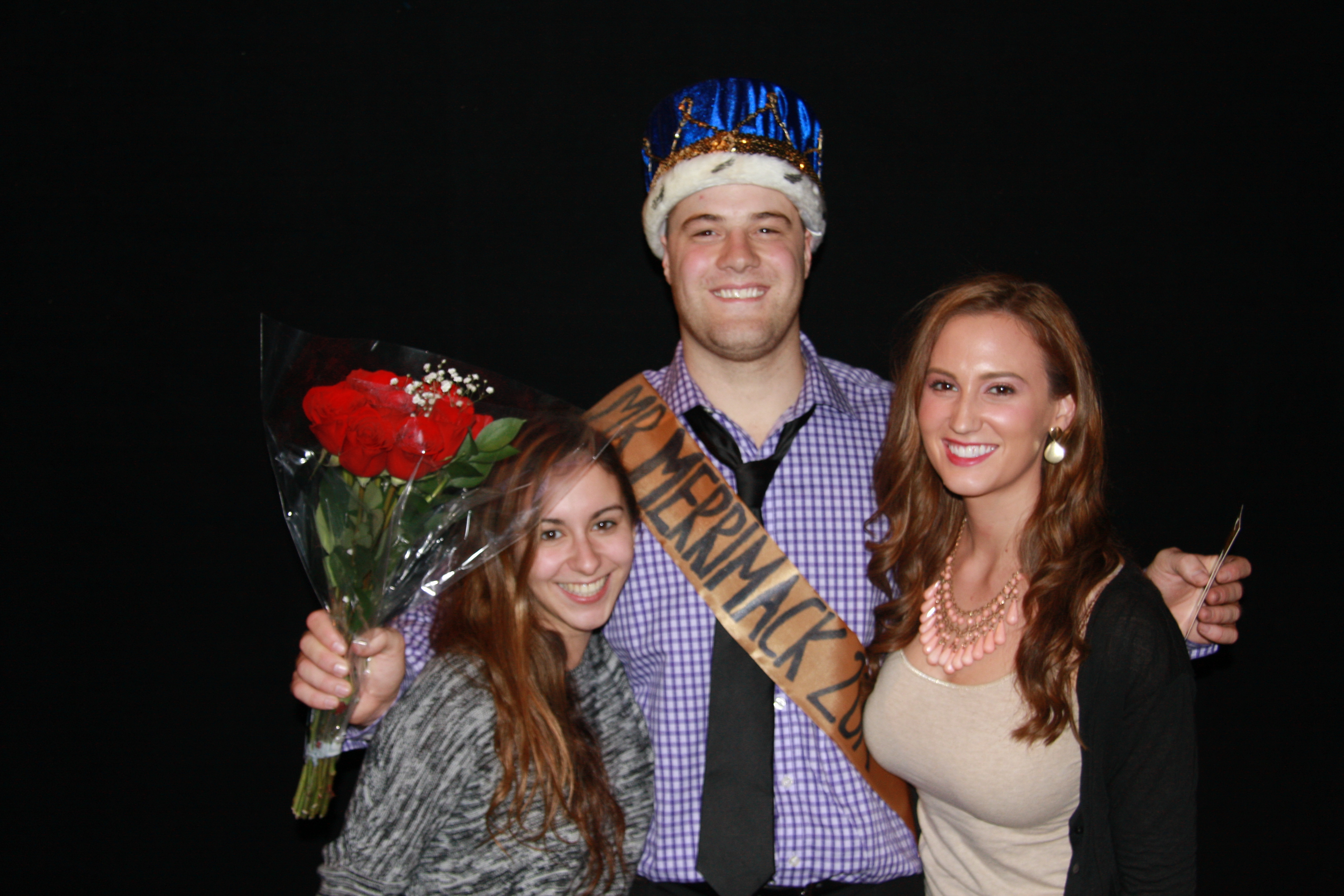 Students, faculty, parents, and alumni filled the auditorium of The Rogers Center Oct. 17 to kick off Homecoming Weekend 2014. The crowd gathered to support the seven students competing for the title of “Mr. Merrimack.”

These seven boys kept the audience entertained for two hours while showcasing themselves in the four events of the competition: swimsuit, talent, formal wear, and a question and answer segment. The event was put on by the 2016 Class Council, and was hosted by SGA President Tim O’Leary and junior Molly Glasheen. The two hosts had a dynamic energy that captivated the crowd as they guided them through the evening.

The 2016 Class Council selected a tough group of judges this year; each judge has a close connection to our Merrimack Community. Tony Brunco, a Merrimack Graduate from the class of 2014, was invited back to campus to judge the event. Tony is the former SGA President and is currently attending Suffolk University Law School. Merrimack Alumni Timmy Smith was also invited to judge the event. Timmy graduated in 2011 with a BA in math and physics, he threw on his cap and gown once more in 2013 to receive his masters degree in Secondary Education from Merrimack. Smith is a proud alum and back in the day competed for the title of Mr. Merrimack, taking home second place. Jane Parent, a management professor at the college, was a judge in 2012 and was thrilled to be a judge again this year. Assistant women’s hockey team coach, Kacey Bellamy, men’s basketball coach Bert Hammel, and Graduate Fellow Nicholas Frias took their seats at the judge’s stand for the first time proudly this year and enjoyed being involved in the Homecoming Weekend festivities.

During the show’s intermission The Dance Team performed their latest routine to the song “Bang Bang” by artists Ariana Grande, Nicki Minaj, and Jessie J. Senior Captain Kelly Vaillancourt danced rhythmically to the center of the stage during the routine capturing the eyes and hearts of the audience. Macapella wowed the crowd as they sang the song “Royals” by Lorde using no instruments other than their own voices. Senior women’s basketball star Chole Rhothman beat-boxed along as Macapella members gave the popular song an acapella twist.

Junior Jonathan Roberto of Lynnfield was crowned Mr. Merrimack 2014. Aside from staying on top of his school work for his sociology and clinical psychology major, Roberto is also a member of the football team. Several members of the football team came out to support Roberto, each time he took the stage his fan base roared with enthusiasm.

What did Roberto do that made him stand out from the rest? The answer is simple, he was himself. Roberto’s personality captured the crowd as he gave it his all in each of the events. During the first event, the swimsuit competition, Roberto slowly walked onto the stage holding an umbrella and sporting a rain jacket and sweats, suddenly a change in pace occurred as the song “She’s My Cherry Pie” by Warrant blasted through the Rogers Center speakers. Roberto then threw the umbrella, ripped off his rain jacket and pants and walked confidently to the center of the stage wearing only a Speedo. For the second event, the talent act, Roberto puts some clothes back on and took the stage wearing a collared shirt and jeans, he sang the song, “I’m Gonna Be (500 Miles)” by The Proclaimers and had the whole crowd signing along by the last time he sang the chorus. He jumped off the stage and went into the crowd, running up and down the aisle still, never missing a beat. The event that really sealed the deal however, was the formal wear section, while other competitors asked girlfriends or friends to escort them during the event. Roberto was accompanied Assistant Director of the College Sally Unis’s 3-year-old daughter, who stole the hearts of the audience. Roberto, dressed in a suit and tie, held hands with Unis’s daughter who was dressed in an adorable gown and he spun her in circles as they made their way across the stage.

“It was pretty close but I had a great time and thank you to everyone for coming out especially the boys in back” Roberto stated after receiving his crown and sash.

Keep an eye out for Jon on campus, and be sure to check out the next edition of The Beacon, as Jon will be featured as Merrimack’s Most Interesting Person.