Volleyball on track after Invitational 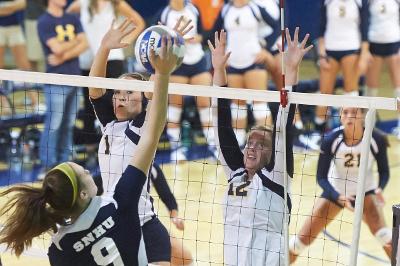 The women’s volleyball team is ready to take on another season full force. The Warriors haven’t wasted any time going against the competition at the start of their season. With some new additions along with some veterans, they are sure to get things rolling no matter what stands in their way in hopes of creating a championship contending team.

Their season started the first week in September and they did start off a little rocky. Coming off a loss against Southern New Hampshire University(3-2) but bounced right back with a victory against St. Michael’s(3-1) on their home court.

The team then headed to Delaware for a huge test against some tough opponents. They started off the invitational with a loss to Holy Family 3-2 followed by three straight wins against Dowling(3-0 final), Wilmington(3-0 final), and Millersville(3-1 final). Junior libero Madison Burke played like a champion at the Delaware Invitational with 20 digs against Wilmington and 18 against Millersville.

Senior Corrine Gosselin felt that the team didn’t play up to their potential but then turned the corner in the final few games.

“We were off to a bad start and played down to the other teams level”. “We kept our intensity high for the rest of the games, everyone was so loud and cheering on the court and bench. We really wanted the win,” said Gosselin.

Merrimack senior Aliya Rakhmetova thought that it was a great building block weekend and that they took some much needed wins against some serious competition.

“It was a successful and fun weekend,” said Rakhmetova. “We had some big wins that will help us in the long run. We beat teams that usualy win their conference and make it to NCAA’s”.

“We’re here to win, and we refuse to back down.”

Last season the Warriors went all the way to the to the NE-10 championship falling just short to rival New Haven 3-2. With the team looking nearly identical to last years tem, the Warriors know that it’s championship or bust,

“I’m expecting a championship from us,” said senior captain Stephanie Sheehan. “We are more than capable of it, it just depends on how we choose to play each game. We have the potential, we just need to believe in ourselves. As long as we give everything we have I know we will be successful”.

The Warrior’s will play next on September 30th against conference rival Saint Anselm at 7pm at Hammel Court.