Long Road Ahead for Men's Hockey 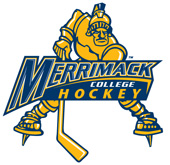 It’s been a busy time for the Merrimack Hockey team since returning to campus after New Year’s, having games as soon as they returned to campus and already playing 10 in January. The Warriors have already played 10 games since the break, suffering through a difficult 3-5-1 stretch to open the second half.

Despite the difficulties, the Warriors have actually shown improvement when compared to their first half performance. Merrimack endured an abysmal 4-10-2 start, but has already won three games in the month of January. In addition, the Warriors earned points in four straight weekends for the first time all season before that streak was snapped with a home-and-home sweep at the hands of Merrimack Valley rival UMass Lowell. That streak started at Frozen Fenway, where Mike Collins hit a late goal before Providence College tied the score quickly to give the Warriors a point in the prestigious event. The Warriors then hit the road and split a weekend series at No. 11 Clarkson, giving the team its first victory against a ranked opponent all season. On Martin Luther King, Jr. Day weekend, Merrimack won the home end of a weekend series with National Runner-Up and No. 5 ranked Quinnipiac University. The win against the Bobcats was a huge statement for the Warriors, who dropped 6 goals on the top ranked defense (1.78 goals allowed per game at the time) in the country. Interestingly enough, the Warriors are a perfect 7-0-0 this season when scoring 3 or more goals.

With a 7-15-3 record this season, Merrimack’s hopes of a playoff berth are virtually extinct. The only real chance the Warriors have would come through winning the Hockey East tournament in March, but a long road lies ahead before then. With seven games (all Hockey East conference matchups) left in the regular season, Merrimack sits dead last in the conference standings, though they trail Notre Dame and Massachusetts by just 3 points for an opening round home playoff series. Those 3 points won’t be easy to come by, as Merrimack hits the road for its next three games against No. 2 Boston College and No. 21 Maine before finishing the season at home with weekend series against No. 19 Vermont and No. 20 New Hampshire.
For the Warriors to get there, a total team effort will be required. That said, a few key players need to continue their steady play through the end of the season. Seniors Mike Collins (team-leading 5 goals and 8 points in the second half) and Brendan Ellis (team-leading 5 assists) in particular need to shine. Collins, a preseason All-Hockey East selection, has carried the Warrior offense the past two seasons and has recently clicked well with sophomore Brian Christie centering the top offensive line. Brendan Ellis, arguably one of Merrimack’s best defenders, has added a spark with his smart passing. A tough defensive game in particular cost Merrimack a game at home against Lowell (-2 overall plus an additional turnover that led to a shootout goal), but Ellis’ steady hands have helped shore up an improved Warrior defense that will have its hands full in the coming weeks.