Home > Sports > Bushido: The Way of the Warrior (Podcast)

Bushido: The Way of the Warrior (Podcast) 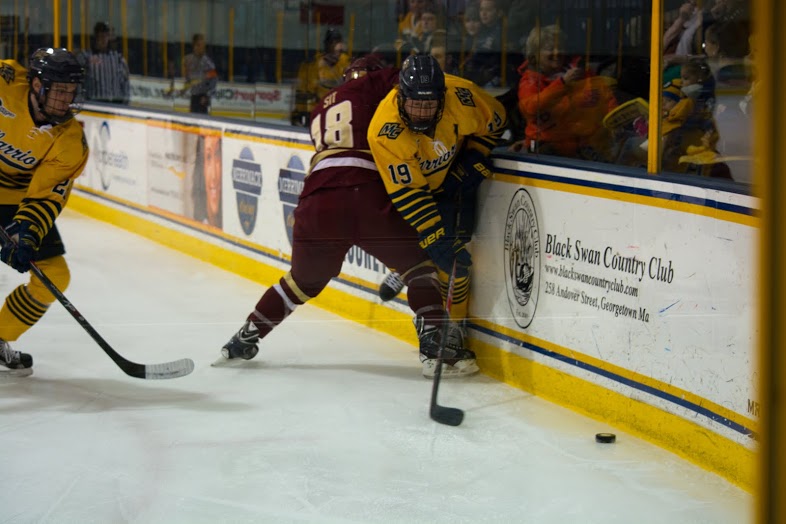 Rhett Bly (19) and John Gustafsson (28) battle in the corners against BC. Photo by Kelli Readey

After a difficult first half that saw the Warriors go just 4-9-2, the team has started to bounce back, already with three wins under their belt through January. Of course, 3-4-1 isn’t exactly what the Warriors had hoped to accomplish. Taking a closer look shows that the team is showing positive signs for the remaining five weeks of the regular season and a still to be determined opening round series in the Hockey East playoffs.

After tying #4 Providence at Fenway, defeating #11 Clarkson on the road, and taking quality home wins against #5 Quinnipiac and Massachusetts, the Warriors have earned points in four straight weekends for the first time all season. Consistency is still an issue – Merrimack lost the Friday night game in the weekend series against Clarkson, QU and UMass – but coach Mark Dennehy sees things finally coming together.

“We’ve got a better feeling for each player,” Dennehy said. “…we know a little bit more and I hope that they do too.”

In addition, Dennehy interestingly talked about the phrase “Bushido” which literally translates from Japanese as “the way of the warrior.” It’s something the coach is trying to infuse as a mentality both on and off the ice that relates a lot to the grinding style of hockey Merrimack plays.

“There’s a way that we’ve played this year that’s been successful, and when we get away from that – and a lot of times that’s on the road – we haven’t been as good,” Dennehy said. “The term we used today is ‘Bushido’ and [Strength and Conditioning coach] Mike Kamal has it up in the weight room. And as I was thinking about our play, you know when we play the way that we’ve played since I’ve been here – a certain style, the way of the warrior – we’re very effective and hard to play against.

“It’s simple in the sense that I think everyone in our program understands it so there’s no hesitation. Hopefully it allows us to play faster because we know what we’re doing. Lowell does it to a T, Lowell knows how they want to play and there’s no wavering. If there is it was at the beginning of the year when they kind of got back to learning what they need to do to be successful. And then they get into that groove and they’re in that groove now. We’ve got nine games to get into that groove.”

Merrimack heads to the Tsongas Arena in Lowell Friday night before returning home for Saturday’s latter end of the home-and-home at Lawler. The River Hawks own one of the top defenses in the league, allowing just 1.96 goals per game. Merrimack is a perfect 7-0-0 when scoring 3 or more goals this season.

You may also like
Do E-mail Accounts Graduate with their Owners?
Always Sunny Actor, Merrimack Alum Charlie Day is 2014 Commencement Speaker
A Great Big Disappointment?
Athletics Offers $5 Bargain for Weekend Trip to Maine
About Post Author