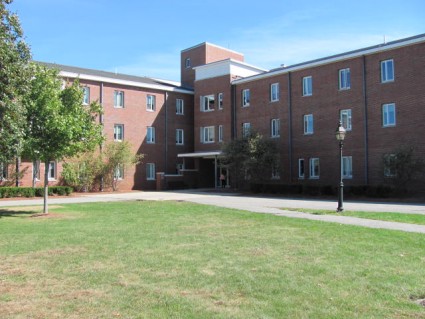 At the latest Mack Meeting in Cascia Hall, student concerns toward dining service expansion were addressed, with the potential for O’Brien hall to be a new home for the Merrimack community to enjoy a meal in the near future.

With the congestion constantly at primetime hours of lunch and dinner, many students have been disgruntled by not being able to get a substantial meal for many reasons. The lack of seating
in Sparky’s Place and the limited number of alternative places on campus to eat, it was a main
issue which was voiced on Tuesday. Some answers were received in return, which included the
first floor of O’Brien hall to be renovated into another dining area. Junior Evan Sweet was extremely pleased to hear of this, “Seeing I am living in the apartments, it will make getting food a lot easier. More importantly during the winter months as well, having a place in close proximity is more appealing to me,” says Sweet.

Besides offering more seating, it would have the setup of what ZeBi has in the McQuade library.
President Hopey also noted that dorm space would not be affected and they will not be removed
once the change is permanent. If anything, it will help in clearing up a lot of the crowded space
in Sparky’s Place, seeing it is meant specifically for more of an area for seating. Current O’Brien Hall resident Ben Bahe is looking forward to the new addition.

“It would definitely be beneficial for people who cannot make it to the cafeteria during its
usual hours of operation. I personally believe students always want more variety on campus,” says Bahe.

So this along with all of the other information received at the Mack Meeting will keep it
interesting to see how the campus evolves over the course of the next couple years.