Nicole Curtis may be the one to display #1 on her soccer attire, but she considers the number to be representative of her entire team. The NCAA Division 2 Women’s Soccer Team holds a strict motto: “We hold each other accountable for our actions, always” explains Curtis, which is something that is continuously noticed during their performance on the field. As the women push hard for individualistic goals during the season, they are all playing to make it one spot higher than the teams they play against each season. Playing since she was just 6, Curtis has blown away her coach and her team this season with incredible saves in her goal keeper position. Curtis, a senior from Billerica studying Athletic Training, recognizes those who have supported her from the beginning and those who she will never forget as she graduates in just a few months. This athlete opens up about what the sport of soccer means to her, and how her team means even more.

Q: Could you tell me a little bit about your team and your successes thus far? 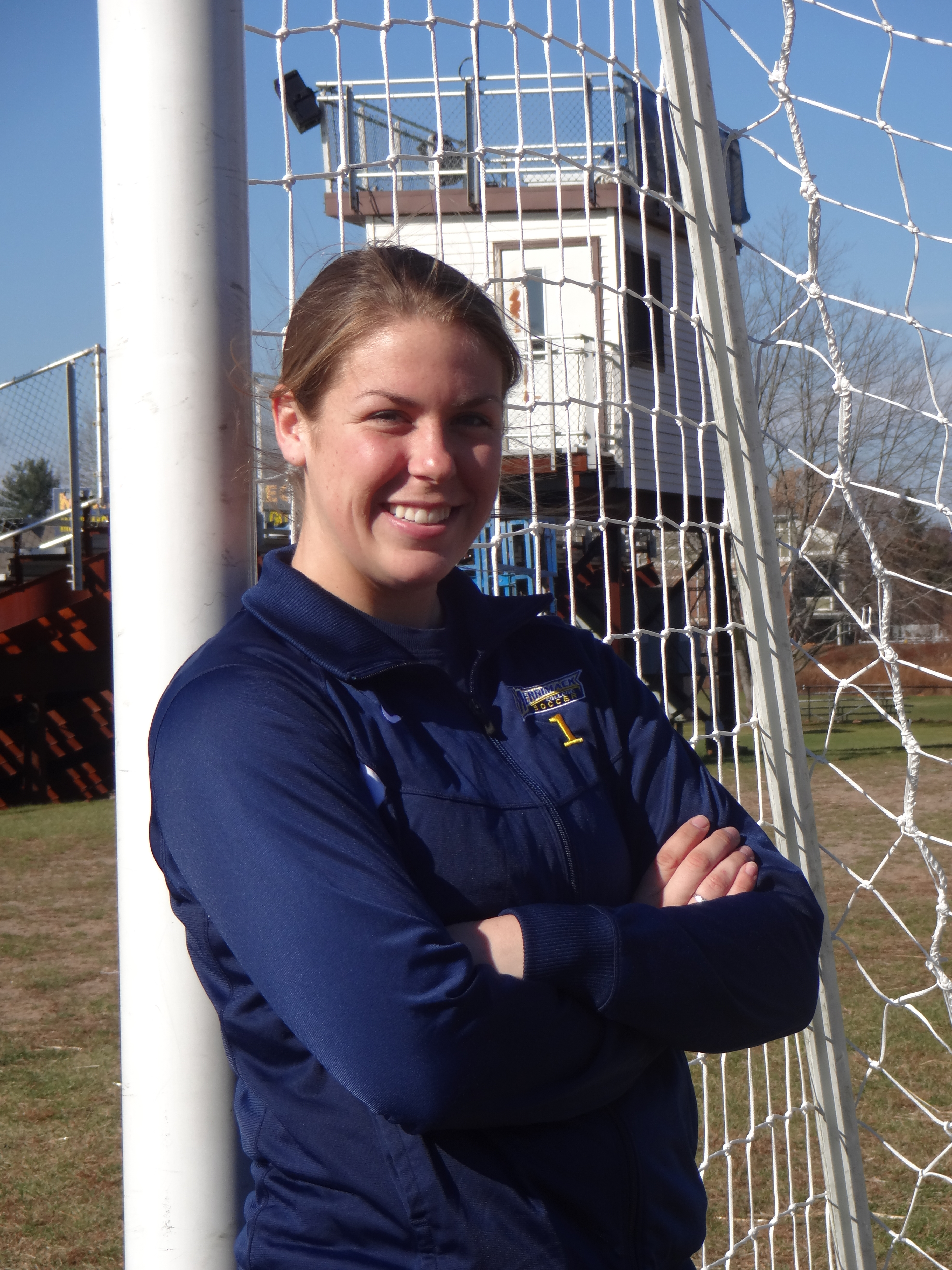 A: We have a pretty young team made up of a lot of starters who are doing very well, I feel so comfortable with them playing front of me. To be honest, I wasn’t fully confident about my position and abilities this year, however all of the support from my team and the new goal keeper coach changed that real fast. There are saves this year that I don’t think I could have made last year. I think it is the support that I have been given this year that really makes the difference.

Q: Out of all sports, why did you choose your sport?

A: I think I was just good at it; I loved that it was in the fall and it was a very team oriented sport.

A: Coming into college I had 30 automatically good friends which isn’t something everyone has. We constantly we push each other and we want each other to do well so we are playing and working to our highest potential.

Q: How old were you when you started playing?

Q: Is there anyone you model your skill set or gameplay after?

A: My goalie coach takes so much of her time and life to make me a better player, and I want her to know that I am responsive to her instruction, and I appreciate the hustle of my entire team.

Q: Is your sport harder than any other sport?

A: Soccer brings in all components of other sports into one. Football you don’t need endurance because you don’t need to run, and you aren’t being slide tackled in volleyball. All sports have their hard aspects but there are many that go into soccer.

Q: Do you have any rituals you do before you play?

A: I always put my gear on my left leg first, and then the right. After warm-up, I will re-tie my cleats even though they are fine. I listen to the same songs on the way to the locker room, and my water bottle is always on the right side of the net.

Q: What is your most memorable moment?

A: I think most recently, it was our win over AIC (American International College). They were undefeated this season, and we came out and played the most perfect game of soccer that we could have ever played. I made a few saves but it was the team as a whole that made the win. They all rushed onto the field and celebrated. Our attitudes spread like wildfire.

Q: If you could play a different sport, what would it be?

A: If I could play a different sport it would probably have to be lacrosse. It’s played outside on the field, and in my opinion an outdoor sport is the only way to go. I wouldn’t do well playing a sport that was very individual oriented, like track or golf. Having your teammates there to support you and motivate you if probably the best feeling in the world.

A: This year my team and I had an awesome fan base. Of course my mom and my grandmother come to almost every game, home or away. We could be playing four hours away in New York and they’re both there to cheer me on. I’m very lucky. Also, this year there have been a ton of really influential administrators at Merrimack who have come to watch a few games. It gives me such a great sense of pride that they’re taking time out of their day to come watch myself and my team play soccer in the gold and navy.

Q: Why should fans watch you play?

A: I don’t know why they wouldn’t! Sometimes, as much as I love being a part of the team on the field, I wish I could just sit up in the stands and watch my team play.

Q: Do you consider the sport you play, a big part of your identity?

A: Absolutely. I’ve played soccer ever since I can remember and it truly is a part of every decision I’ve ever made; where I will attend college, what courses I take and how I have to manage my daily schedule. Soccer has also identified me as a person through all of the amazing people I have met throughout my soccer career.

Q: If you could play or do your sport anywhere in the world, where would you choose?

A: I would love to play soccer in Germany, specifically the Olympiastadion. This stadium was home to the FIFA World Cup in 2006 as well as the stage for the famous Zidane’s head-butt, which will be forever remembered by avid professional soccer fans. To play in Germany, where a lot of my heritage derives from would be a dream come true.

Q: Would you have done anything differently in your college career so far?

A: I wish that I had gotten involved in more than just soccer and my Athletic Training major earlier. I love all of the staff and administrators on the third floor (of the Sak) and my years at the Mack would have been so much different if I had gotten involved from the beginning, instead of waiting until senior year to be involved.

Q: What advice would you give a student that wants to stay fit and active but is not on a Merrimack sports team?

A: The new gym in the Sak is pretty high-tech, I’m super jealous that I can only use it for one year. If you’re not a gym person, join some sort of intramural team, it’s a fun and easy way to make friends, and it allows you to compete in a sport that you love and stay fit and active. Stays fit and exercise because you want to for you, not to be in competition with others.