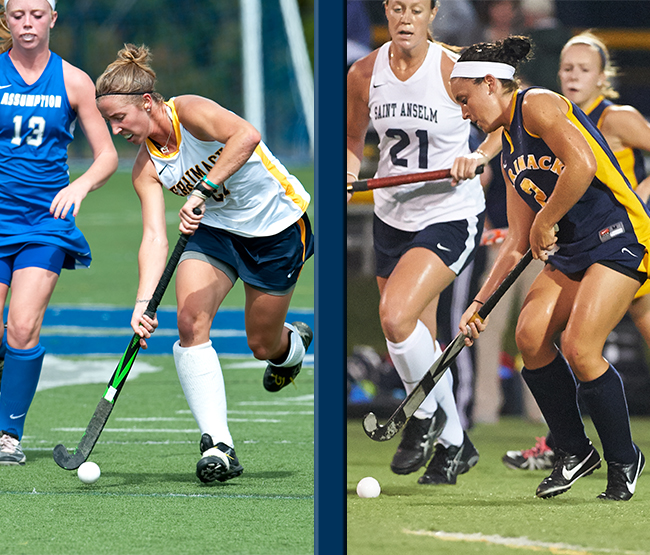 The women’s field hockey team is on the road to success and going full speed ahead. With seven consecutive conference wins in the last month improving their record to 9-1, the team sits at second place in the conference.

“The communication between our team has gone up a lot,” said Stacey. “The support for each other on and off the field is great as well.”

“The dynamics of our team are really great,” Magerman began. “I’ve been on teams where all we do is fight and it was terrible. It’s not like that with us. We mesh really well.”

Magerman and her classmate, Kaitlin McCauley, talked about the transitions as freshmen on the team.

“Coming in as a new player, everyone was really welcoming,” McCauley said. “It just made stepping up and being a role player a lot easier.”

“Being on the team is very enjoyable,” Magerman added. “Everyone was very welcoming as well. I just love spending time with the team.”

With the NE-10 Semifinals right around the corner, the Warriors are in the dog days of the season. The goal is to win the conference championship en route to an NCAA tournament berth and more.

“I would be awesome to get an NE-10 Championship and an NCAA title as a freshman,” said an ambitious McCauley.

As ambitious as an NCAA championship may seem, this talented group of youngsters has the potential to achieve its dreams. Despite what they believe they can accomplish, veterans know not to look too far in front of them.

“Not one team is bad this year,” Stacey said. “We always take what we learned after a win or a loss and improve on it. Learning from our mistakes in both practices and games is key. If we can beat undefeated Stonehill, then we can beat anyone.”

They will have to do it again Friday afternoon, though, as the Skyhawks come to Merrimack for an NE-10 Conference Tournament Semi-Final matchup. Despite Merrimack holding a higher ranking in the conference (second place to Stonehill’s third), the Skyhawks are ranked higher nationally (No. 5 ranking to the Warriors’ No. 7 position).

Stonehill only has two losses on the year, one of which came at the hands of Merrimack to shock the then-undefeated Skyhawks. Should the Warriors win the semi-final matchup and advance to the conference final, they’ll almost certainly be a lock for the national tournament.

Stacey knows just how difficult that task will be.

“As a team, we have to go out and give 100 percent in everything we do,” she said. “We have to play every game like it’s our last.”

It’s not a bad strategy considering at this time of year, every game very well might be.