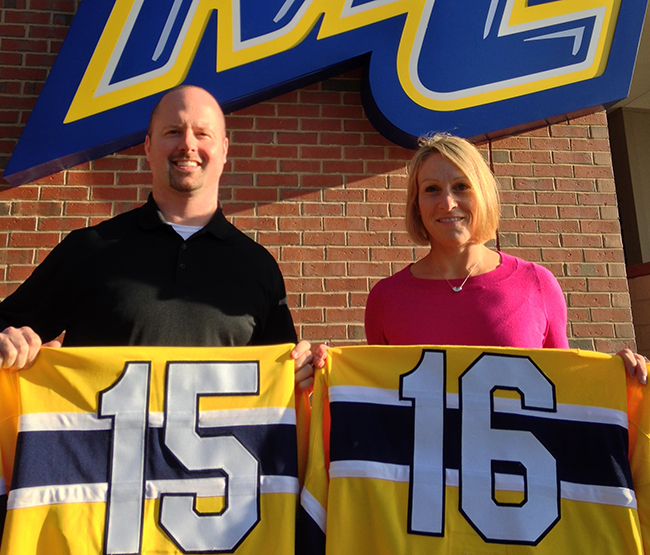 After hiring arguably the best coach on the market in Erin Hamlen last June, Merrimack officially announced today that the women’s ice hockey team will begin play in the 2015-2016 season and immediately jump into Division I and the Hockey East Conference.

Rumors had initially swirled about an earlier start date for the program, and starting either as a club team or Division III program (there is no Division II in hockey), but the decision has been finalized to start in one of the toughest conferences in the country.

Hamlen spent last season coaching the University of New England – a Division III program – through its inaugural season. She previously started in net for Team USA for five years and was named the 1994 USA Hockey Women’s Player of the Year. She also played for four professional men’s teams throughout the course of her career.

Check out the official press release below:

Introduced as the College’s 24th varsity sport, the women’s ice hockey team, guided by head coach Erin Hamlen, will join the Division I and Hockey East ranks as the conference’s ninth member to sponsor a women’s program.

“We are excited to bring a quality women’s hockey program to Hockey East,” said Christopher E. Hopey, Ph.D., President of Merrimack College. “This varsity program will allow Merrimack to expand its recruiting efforts and meet the growing student-athlete demand of finding a rigorous academic experience coupled with a competitive and diverse set of athletic offerings.”

“It was a great day for our Athletic Department when we hired Coach Hamlen this past summer, and today’s announcement is equally exciting,” Director of Athletics Jeremy Gibson noted. “Merrimack has a rich history in the college hockey world, and I am thrilled that with the support of President Chris Hopey, we will be introducing a women’s ice hockey team to a college and community with such strong passion for the sport. I am grateful for the support received from Hockey East Commissioner Joe Bertagna and the representatives of the other schools across the league throughout this process.”

“I am incredibly excited that Merrimack Women’s Hockey will be a full-fledged, varsity, Division I program in 2015-16,” Hamlen stated. “Our staff has made great headway over the past few months, and we are confident that our program will be highly successful because of what Merrimack has to offer our student-athletes. We look forward to competing in Hockey East in our inaugural year, and appreciate their support as we begin our journey into one of the best leagues in NCAA Hockey.”

Hamlen, who led the University of New England women’s hockey team during its inaugural season of existence in 2012-13, will chart the course for the Warriors during the next two years. Prior to UNE, Hamlen spent a decade at the University of New Hampshire, a perennial power in the Women’s Hockey East Association. During her tenure, Hamlen helped guide the Wildcats to four straight Hockey East tournament titles, six straight regular season crowns, and two appearances in the Frozen Four.

Hamlen and assistant coach Brent Hill have already begun the two-year journey over the past few months recruiting and building the foundation for a roster for the 2015-16 campaign. When the team begins varsity play, they will join fellow Women’s Hockey East Association members Boston College, Boston University, Connecticut, Maine, New Hampshire, Northeastern, Providence, and Vermont.

“This is an important day in the history of our Hockey East women’s conference,” said Hockey East Commissioner Joe Bertagna. “We look forward to significant contributions from the Merrimack women, much as their men have for so many years.”

You may also like
Do E-mail Accounts Graduate with their Owners?
Always Sunny Actor, Merrimack Alum Charlie Day is 2014 Commencement Speaker
A Great Big Disappointment?
'A Great Big World' and 'Plain White T's' to Perform at Merrimack College Spring Concert
About Post Author