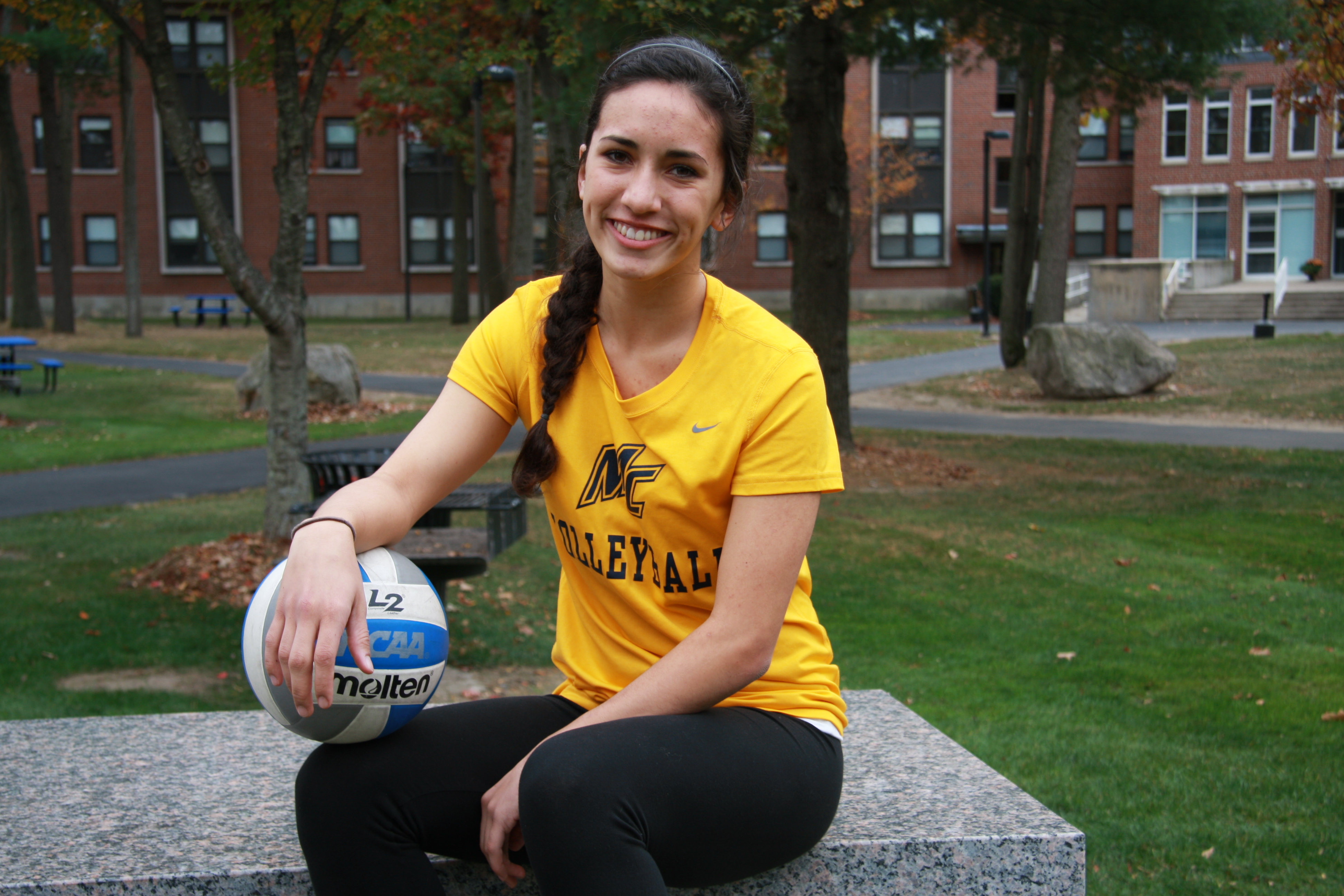 The Merrimack women’s volleyball team is on the road to success. With an 8-11 record, however, the ladies are still pushing for that No. 1 spot in the NE-10 conference. New players have been added to the team who have had such a positive impact to the program, and one of those is freshman outside hitter Jocelyn McLain. Check out why you should be at the volleyball games this season and who Jocelyn is as a student athlete at Merrimack in this week’s Warrior Spotlight.

Q. Out of all the sports in the world, why did you choose volleyball?

A. When I was little, I used to watch my sister (Chazity Gonzalez) play volleyball. I really wanted to play and I kept playing because I really like it! The team aspect of it is great and it is very fast paced.

Q. You said you like the team aspect of the sport, what specifically do you like about it?

A. It’s different from other sports where you can have one superstar run the ball up and down the court or field. But with volleyball you cant. You can only touch the ball once. You can’t have just one really good player, you have to count on everyone or else no one stands out. You really have to count on your team and trust each other.

Q. How old you were when you first started playing?

A. I started playing when I was 8 and picked up club volleyball when I was 12. I’ve been playing ever since.

Q. Is there anyone you model your skill set or gameplay after?

A. Angela Knopf. She played in the Olympics and I train with her a lot when I’m back home in Colorado. She taught me a lot about effort and always giving it your all and how to be a team player because not everyone works the way you do, so you have to find different ways to motivate each person and to get the most out of them. She’s really awesome!

Q. Do you think it’s harder to play volleyball than any other sport?

A. No, I think golf is the hardest thing in the world! I can’t hit the ball; I get angry and I just wanna break the club. But I feel like every sport is a mental game. So you have to be able to harness your mind differently for it.

Q. Is it rewarding to you that volleyball is an Olympic sport and is something that is recognized on a global scale?

A. Yeah, I feel like it gives people a different set of eyes to look at the sport with when they see these amazing athletes playing it and they see what the sport can be compared to what they might actually watch. And I think it gives athletes something to aspire to. I like that you can continue going with it and it only gets better when you get older.

Q. Do you have any superstitions or rituals that you perform before a game?

A. I’m not that superstitious, but I always have to have all my clothes folded. I stack my pants, jacket, my warm ups then my jerseys. I have to fold them a certain way and I only wear one specific type of underwear. And I do my hair the same way every time.

Q. What is your most memorable moment on the volleyball court?

A. During a high school game, my senior year we were playing Rocky High School, and they are a really good team. They hadn’t lost one set to anybody. They still beat us overall but me and this other girl were yelling back and forth on the court and it got really intense. It was just a really heated game, probably the best game of the season. Everyone played the best they could have ever played, it was really awesome.

Q. If you could play any other sport, what would it be?

A. I am going to give you two sports: I would live to wrestle. It would be so cool to be a wrestler! And, I would play basketball because I would dunk! You can’t dunk in volleyball!

Q. Why should fans go watch you volleyball games and what is cool about volleyball that most people don’t know?

A. Most people don’t realize how many rules there actually are in volleyball and how certain people can’t pass certain lines on the court. There’s a lot more technique involved than you realize. And people should come because I think it is so fun to watch because it is so fast paced. The games are kind of quick and there’s always something happening.