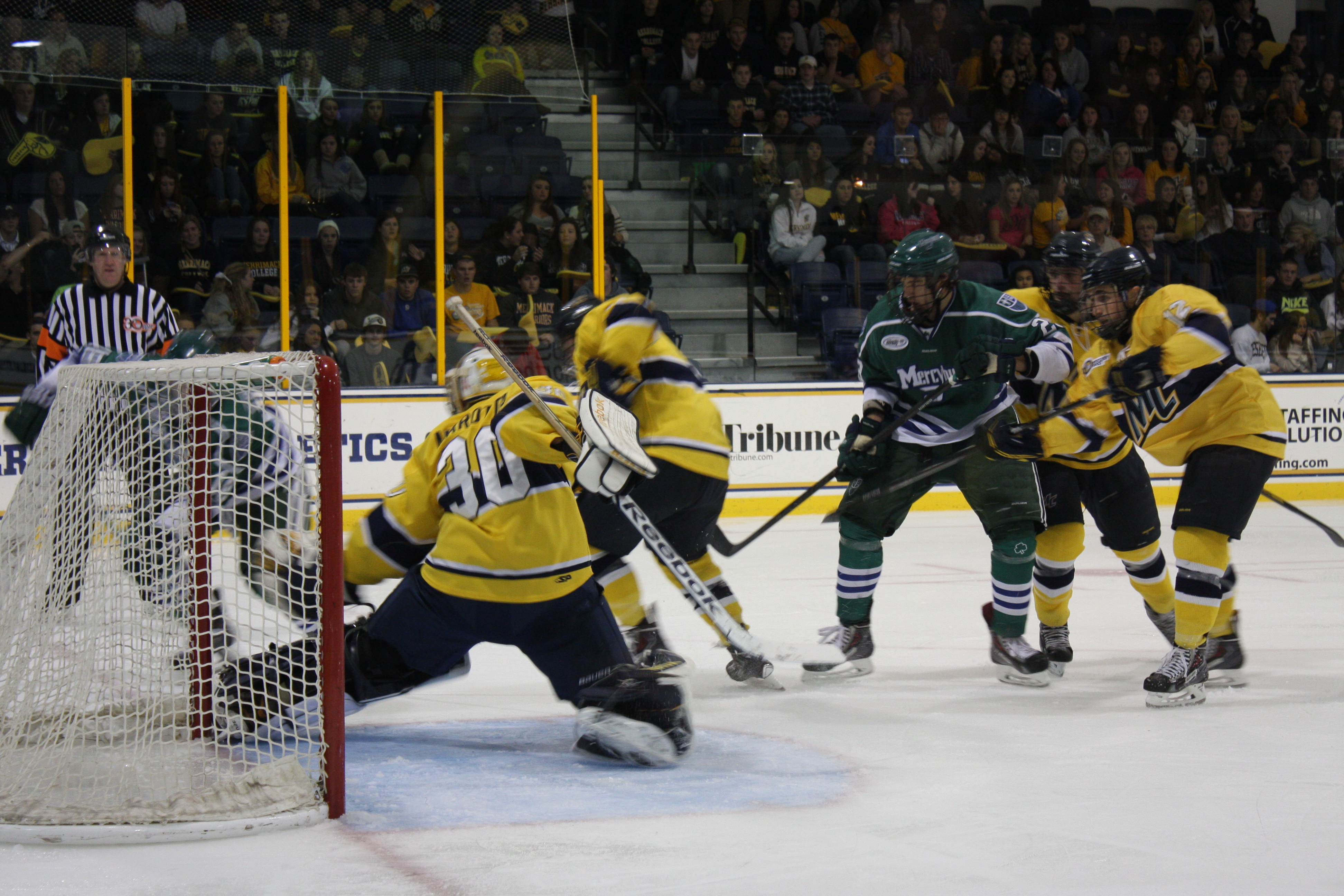 The Merrimack hockey team opened up their home schedule with an unfamiliar Mercyhurst team. The first ever competition between these two schools led to a weekend split.

On Friday, Merrimack skated onto their home ice for the first time this season. The Warriors looked a little out of sync in the first few minutes of the game. Tom McCarthy took a penalty at 11:33 of the first to give the Lakers the early power play. Just like that,  Mercyhurst’s Ryan Misiak capitalized on the advantage to give the Lakers the early 1-0 lead. Just five minutes later Merrimack got on the board with a goal by Justin Hussar to tie the game at 1-1 for the Warriors. The goal was assisted by junior Dan Kolomatis and senior Rhett Bly. The period ended with the score tied at 1-1.

The middle frame saw both teams notch a goal. Daniel O’Donoghue slid the puck past Warrrior’s goaltender Sam Marotta to give the Lakers a 2-1 lead at 12:30, but once again Merrimack answered quickly when junior Josh Myers shot the puck past Laker goalie Jimmy Sarjeant to even the score at 2-2. Clayton Jardine and Kolomatis had the assists. The score was tied 2-2 heading into the final period.

The third period remained scoreless until the very end of the game when Mercyhurst’s Nick Jones scored with 34 seconds remaining breaking the hearts of the Merrimack faithful and giving the Lakers their first win of the season. Sarjeant finished the night with an impressive 33 in the win, while Marotta tallied 18 of his own. Kolomatis had two assists for the Warriors and Vinny Scotti and Bly lead the team with 12 faceoff wins.

One hockey cliché states that things can change quite dramatically with a bounce of the puck. Bruins fans certainly know the feeling, and may have been painfully reminded of it Friday night.

Merrimack coach Mark Dennehy thought that his team played well enough to win and fell victim to an old cliché themselves.

“It’s a bounce of the puck. I thought we played really well at times,” Dennehy said. “I think the biggest area of concern for me is our breakout at times. We get a little too deliberate and try to hit home runs instead of singles.

“The majority of the opportunities they got were because they were patient and we tried to force things, and they capitalized on it.”

Saturday brought a totally different style of play and a totally different result than the Warriors had seen all season. Heading into the second night of the back-to-back, Merrimack had scored only two goals and was the last team in the country to find the back of the net. All of that was forgotten by the final horn Saturday night.

The Warrior power play came out with a bang, scoring three goals on the night en route to a 5-2 Merrimack thrashing over Mercyhurst. Kolomatis three points (1-2-3) gave him five points on the weekend and earned the junior defenseman Hockey East Player of the Week honors. 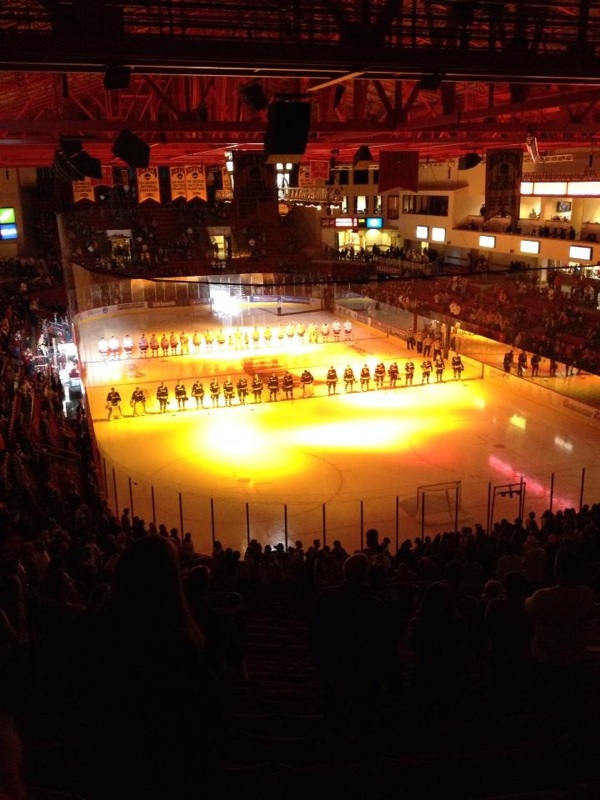 Dennehy took note of his performance.

“He’s taken steps. He’s a man now. He wants to be a leader, and I think he’s played as well as any defenseman so far this year,’’ he said.

Merrimack managed to light the lamp five times despite a scoreless opening period and initially trailing in the contest.

The Lakers opened up the scoring just 38 seconds into the second period but, as was the theme of the weekend, just three minutes later the Warriors would tie the game at 1-1 on a goal from junior Quinn Gould. The middle frame would end with the score tied 2-2.

Hussar put the Warriors ahead for good after notching his second goal of the weekend before John Gustafsson and Vinny Scotti extended the lead.

In addition to the offensive outburst that saw senior Mike Collins, a preseason All-Hockey East selection, tally four points (0-4-4), the Warriors killed several penalties, including a late five-minute major to senior Shawn Bates. Merrimack goaltender Rasmus Tirronen made 20 saves on the night in his first start of the young season.

“We have a lot of ice bags in that room, but that how you have to play to win a college hockey game. It’s hard,’’ Dennehy said.

“They [Mercyhurst] get the five minute power play and I think that stretch is the best Merrimack has played all year.’’

The biggest factor the snake-bitten offense was lacking was tenacity around the net. Everything seemed to click Saturday though, and Dennehy felt a net-front presence and pressure was key.

“They look pretty when they go in but they don’t have to be pretty,” he said. “At the end of the day it’s about getting the puck to the net and banging it home, and that’s what we did tonight. We were very tenacious around the net.’’

With the win the Warriors finally got in the win column and improved to 1-3 on the year. They take on Army for a homecoming thriller Saturday night at 7.