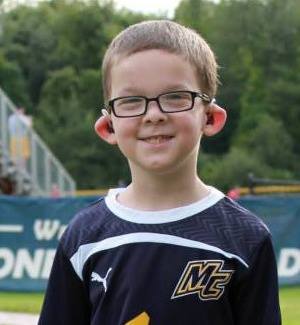 Impact: having a strong effect on someone or something. That is exactly what Brady Antaya has done for the Merrimack men’s soccer team. Brady, 6, joined the team this past June (officially drafted in August) through Team Impact; a non-profit that matches kids with life-threatening and chronic illnesses to college sports teams. Brady is diagnosed with CHARGE syndrome, which occurs in about one in every 8-10,000 births and the characteristics of CHARGE differ for each child. Vision impairment, airway obstruction, hearing loss in both ears and small semi-circular canals which effect balance may be the CHARGE syndrome characteristics for Brady, but his personal characteristics are greater than any challenge he faces.

Off the field, Brady is like any other 6-year-old. He is fully of energy, does karate, loves to watch “Jake and The Never Land Pirates” and loves the color red. His favorite movie is Cars 2 even though there is a bad guy in it (don’t worry, the good guy wins). Soccer is his favorite sport but he also likes baseball, specifically the Red Sox affiliate the Lowell Spinners. When asked who his favorite team was, instead of the anticipated New England answer of “The Pats” or “The Bruins”, with the biggest smile on his face Brady answered with “The soccer team”. 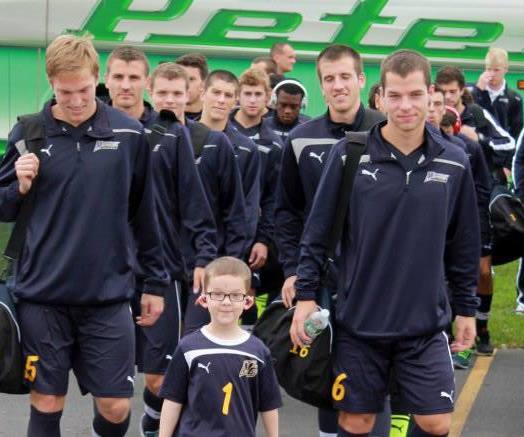 The team immediately welcomed Brady as one of their own and has provided a camaraderie that can only come with being on a team. He has his own jersey and attends practices and games, one of which included taking the bus with the team to New York for their game against St. Rose. Brady has also spent time with his teammates off of the field. Recently him and some of his teammates went apple and pumpkin picking followed by a few rounds of Mario Kart and of course some soccer.

Brady says that practicing and playing with the team, especially with the goalies is one of the best parts about being on the team as well as being the tallest one in the huddle (Brady is always picked up by one of the players). As for soccer in general, Brady exclaimed “Running laps!” is his favorite part. Before games, Brady leads his team to the field where he gives high fives and fist bumps to his teammates and of course, lots of smiles.

“How do you think the team has impacted Brady?” was an overwhelming question to Brady’s parents Cynthia and Keith Antaya who didn’t know where to begin to describe the incredible impact being a Warrior has had on their son. Brady’s father stated “It has really boosted his self-esteem…he’s always excited for games…the coaches have really provided a positive influence on Brady.”

Coach Martone, the men’s soccer coach, could not be more thrilled about the relationship that has developed between him and his players with Brady. “..the reality is that we have benefited as much if not more than he has from this ongoing relationship. Every time we see him he puts a smile on our faces and he has a way of making us forget any difficult situations that we may be dealing with as well as break the daily tension that we deal with when we are in season.”