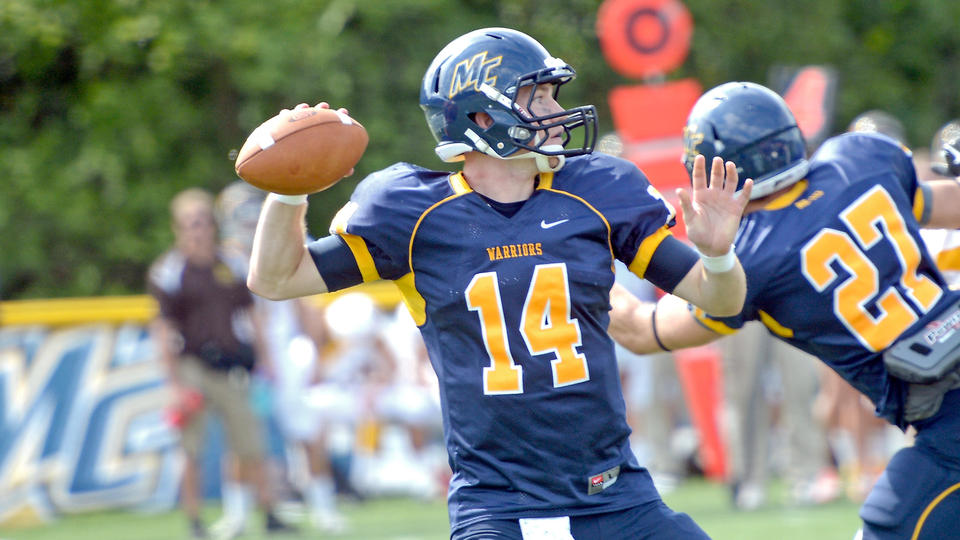 There’s something about the foliage and the weather of October that makes us think of football.  At the start of October, the Merrimack Warriors football team stands at a solid 3-2 record (2-2 conference). That being said, the team has very high hopes for the rest of the season.

Coach Dan Curran, who spent the past three seasons as an assistant on the football staff, has grown as a coach in the program alongside this season’s batch of seniors. After four years, both Curran and the class of 2014 have formed helpful familiar relationships with each other. With the majority of the team being upper classmen, you don’t have to look very far for leadership.

“Coach Curran has set a standard for this program and team and everyone has really bought into it, everyone would agree that there is just a different feeling with this team than there ever has been before,” Tripicchio said.

Tripicchio knows the enthusiasm and effort of the upper classmen funnels down to the younger players – the future of Merrimack football.

“When the veterans are excited and enjoying themselves, the attitude permeates through the whole team, making the entire attitude and morale of the team positive and focused on our goals,” Tripicchio added.

Coach Curran has very high hopes for this program and wants to implement them right now.

The team goal for the season is to make a playoff appearance in the NE-10 championship.

“It’s been a long time since Merrimack has won the title,” Tripicchio added. “And with the conference being the way it is today that anyone can beat anyone, it just proves that title is always up for grabs.”

Coach Curran likes to remind his players that the most important game is the next one you have. He doesn’t want players to look too far ahead because you can never take a team lightly in this conference.

However, there is one game that players have circled on their calendars: October 26th against rival Bentley, homecoming weekend. These two teams have built up the sort of hatred that is beloved in all sports rivalries.

“I’m looking forward to playing Bentley because Merrimack and Bentley have a strong hatred towards each other and it always calls for a good game,” said senior tight end Greg Devine.

Now add to that the environment of homecoming weekend and you got yourself a game you don’t want to miss. Described by Tripicchio as “one of the most exciting games of the year,” this is a game that you for sure don’t want to miss.