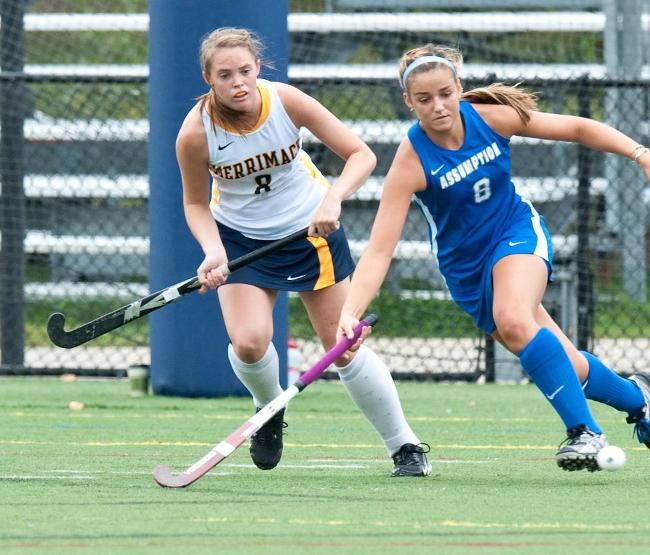 After going sub .500 with a 2-3 record in their first five contests, the Merrimack field hockey team has caught fire the last four games soundly beating NE-10 rivals Adelphi (7-1 final) and Franklin Pierce (4-2 final) in the process.

On Saturday September 28th the team the team faced NE-10 rival Adelphi. The Warriors were familiar with this opponent as they had lost 5-1 to this same Adelphi squad just a couple of weeks prior.

This time the game would go in the Warriors favor with Merrimack dominating the play while routing Adelphi by a 7-1 score. Six different Warriors had points in the game including Abbey Stacey who scored her first two collegiate goals along with teammates Katrina Squeri, Candace Waldie, Maura Doyle, Jessica Otis, and Kaitlin McCauley.

“Once we had it in the circle, every opportunity had to be strong shots. Really what I just saw was it was just kind of hanging in the middle and I just went for it and shot it”, said Stacey, a junior, on her first collegiate goal.

Coach Anne Rounce knew this was a crucial game to win to make a stament to the conference that they weren’t the team that Adelphi saw just a couple weeks before.

“Adelphi was a critical win. We knew we had played awful on the road there, we just weren’t mentally prepared for the game. So I think the girls and the coaching staff wanted to send a pretty strong message to the conference that we’re not the team they saw in the box score”, Rounce said.

The Warriors went on to win their next conference game against Franklin Pierce, 4-2, to get their four game winning streak after a slow start to the season. Coach Rounce believes that the team’s recent success is attributed to the players getting a better feel for each other.

“I think it’s just getting comfortable with each other. It’s a whole different team compared to the years past. There is a lot of learning and teaching going on with the freshman. So, it’s just taken time”.

This past week, Warriors defender Abbey Smith earned the NE-10 Conference Defensive Player of the Week honors. Stacey felt honored to receive this mention and said it boosted her confidence as a player.

“I’m really honored because I’ve never really had something like that before. It really boosts up my confidence level and I have to keep it up now”, said an excited Stacey.

Rounce feels that it is Abbey’s hard work and effort and supporting cast that has led to this honor.

“Abbey’s a good kid. She worked hard over the summer, she stayed here to get classes done and workout for the team and for the season and it shows and pays off”, said Rounce.

“She’s the big rock of the defense but it is definitely her supporting cast that has led her to that honor”.

Merrimack has since had their four game win streak snapped by conference rival No. 5 LIU Post, dropping their record to 6-4 overall and 2-1 in conference play. The Warriors now have two home games this weekend against Bentley and Southern Conn. State.