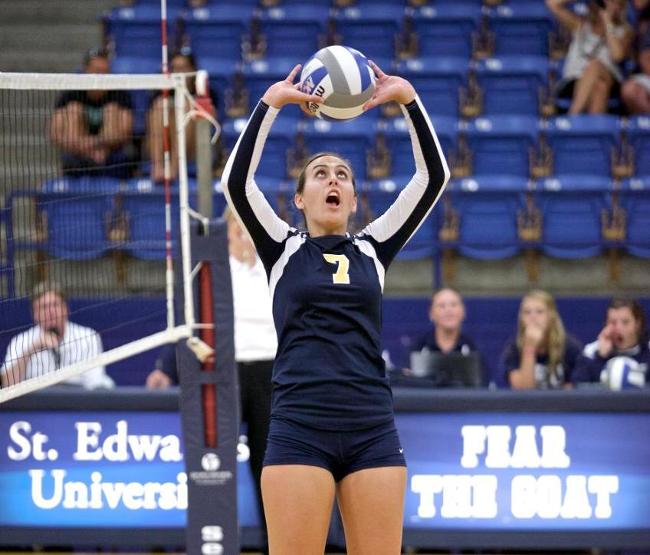 Freshmen Juliette McCall, an outside hitter, and Tara Stuhr, a setter, spoke highly of the team’s recent improvements.

“Each person had more confidence in their individual game, which brought us together as a team,” Stuhr said. “Communication on and off the court helps us stay together and raises our team’s chemistry.”

“We believed in each other and grew as a team,” she said. “Spending a lot of time together and getting to know each other on a personal level really helps our team.”

Stuhr’s goal is to be the best teammate possible en route to an NCAA berth this season. McCall, too, is confident that her team will make it to the NE-10 Championship as long as she stays aggressive and plays hard at all times.

Juniors Stephanie Sheehan, an outside hitter, and Allison Cote, a defensive specialist, feel they’ve turned a corner as a team.

“We are even more of a team this year,” Sheehan said. “There’s more of a structure in the coaching staff and there is more chemistry on the court. That brings out a more positive environment. We click when everyone is involved – all 15 girls and coaches.”

Both Cote and Sheehan hope to help lead the team to the NCAA Tournament this year, while Sheehan also hopes to tally 1,000 kills this season.

Senior hitter Jackie Jones has gotten a different perspective this season, as she’s watched a few games from the sideline with an injury. She believes the team’s energy, confidence and chemistry have improved as the season has progressed.

“I think the chemistry as a team finally clicked, especially bringing in this many new players,” Jones said. “We are learning to trust one another. You can definitely see it on the court; we move as one. Once our energy starts to build, our confidence builds as well. We are unstoppable once we get going.”

Cote summed up the progression nicely.

“Honestly, we got sick of losing,” she said. “Once we competed with Bentley and Saint A’s, we realized that we actually could win. We click so well when everyone does their job and trusts each other.”