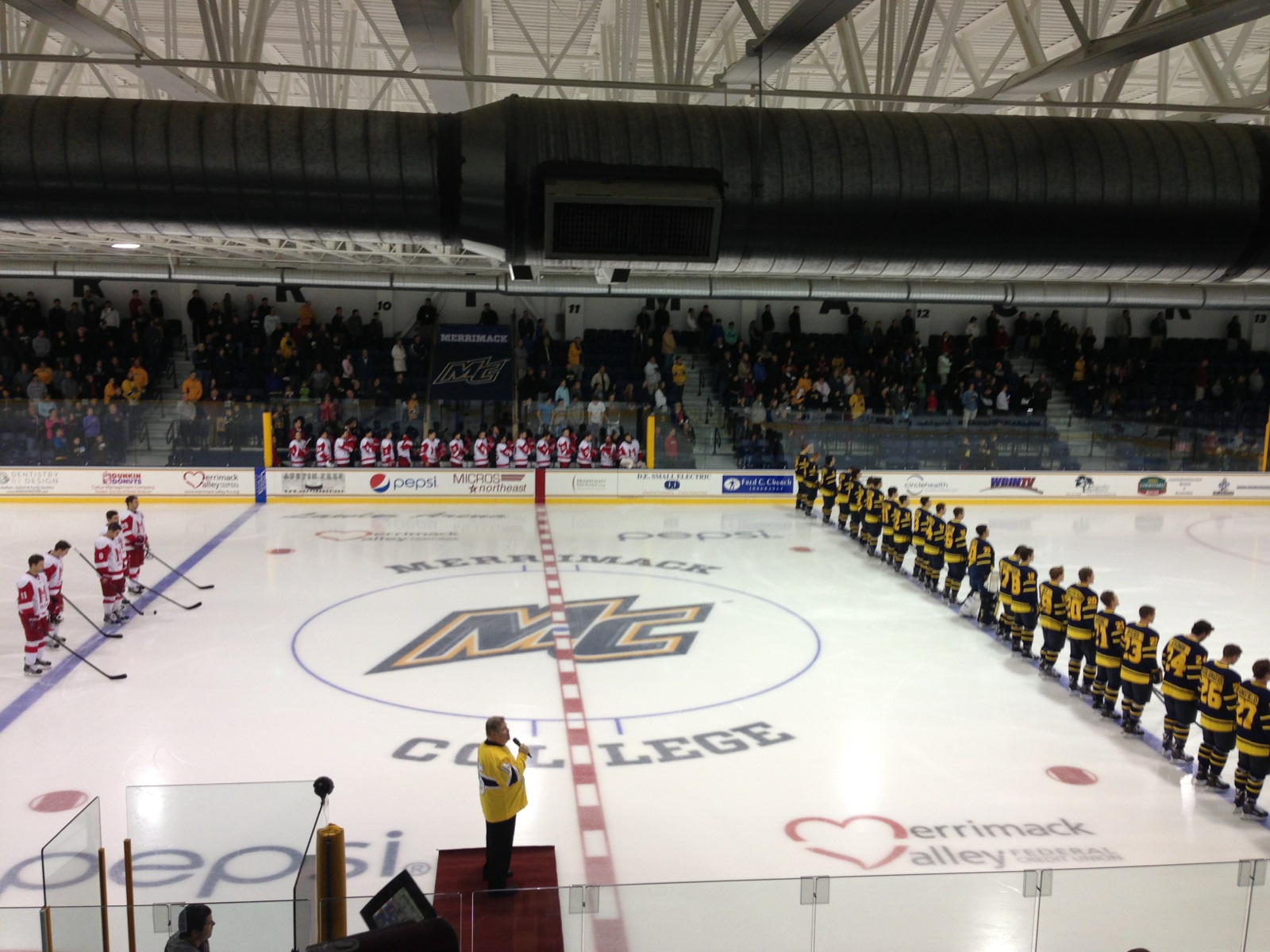 2013 started with a bang for Merrimack hockey. After a disappointing first half in which inconsistency rang loudest among the alarms sounding on this team, the Warriors came storming out of the gates for the first six weeks of the second half of last season. An 8-2-1 stretch through mid-February culminated in a brief stint atop the Hockey East standings before a slow but steady descent. Despite ending the season two games below .500, the Warriors still finished just five points out of first place in the conference.

The biggest difference in Merrimack’s much-improved second half was goaltending, as Sam Marotta and Rasmus Tirronen gave up three or more goals just three times through the first two months of the second half. The problem was offense, as the Warriors struggled to capitalize on opportunities at the net and had seemingly lost the reputation of a banging, bruising team that scored on second, third and even fourth chances and made the NCAA playoffs and stood as the No. 1 team in the country over the previous two seasons.

As the team skated off the ice following a sweep at the hands of Boston University in the Hockey East Quarterfinals last March, no one wondered what had happened; the issues facing this team were obvious. Now, reloaded and returning their top 10 scorers from a season ago, Merrimack is looking to become Warriors once again.

Senior alternate captain Rhett Bly is the first to admit this team is looking not necessarily to regain what it lost, but rather for something new.

“We’re going after our identity again, really trying to be a tough team to play against and be physical,” said Bly, who happened to take a hard hit late in the game hustling after a loose puck. “Right now it’s just shaking that dust off and getting rid of that summer league mentality, banging some bodies and stuff. I got rocked there once, and it felt kind of good actually.”

Part of that identity needs to be regaining a net-front presence, but not by simply throwing one of the bigger skaters out there and hoping for the best like what often appeared to be happening last season. Instead, the skater needs to show his teammates where he wants the shot in order to best redirect it, know when to screen and how deep to do so, come out of the slot every so often so as not to be ignored by a goaltender, and when to fall off back-door and catch someone by surprise. But who on this roster is capable of doing this?

Enter freshman Chris LeBlanc, a 6 foot 3 inch, 205-pound wing already drafted by the Ottawa Senators. He’s a name you should get used to hearing, and a perfect Milan Lucic-like player to play out front and capitalize on the chances his teammates fire on net.

“It’s been pretty seamless for them getting into the lineups. I thought all of them did really well. I don’t know about you guys but I thought it sure didn’t look like they were out of place at all,” Bly said, referencing the play of his new teammates in Sunday’s 1-1 exhibition tie against McGill University. “I thought Blancs (LeBlanc) was really good supporting the puck through the middle. Hampus is a big, strong centerman. For forwards, I thought they played really well.”

Coach Mark Dennehy, too, sees them as contributors.

“They acclimated themselves pretty quickly,” he said. “I think they’ll all be able to contribute to a team that last year finished five points out of first place (in Hockey East). If they can help us get better, then bright days are ahead.”

Although the Warriors only scored one goal off of the 35 shots they put on net, Dennehy saw things trending the right way on offense.

“Blysie (Bly) did a great job to screen it and Kolo (Dan Kolomatis, who scored the lone goal) – It wasn’t a rocket, but he got it through and that same thing happened in the second (period) on the power play when he snapped one off and it went through the goalie’s legs and went wide. It’s hard to get pucks to the net, but when you do you need to make sure the goalie doesn’t see them. Until guys can score from outside the top of the circle like they used to, then that’s what it’s got to be: getting pucks and bodies to the net.”

Of course, if there’s one player on this team who can make heads turn with his playmaking ability and nifty shots on net, it’s senior Mike Collins. A preseason All-Hockey East Team selection, Collins led the team with 38 points (17-21-38) last season. As good as he was last season, the buzz around some college hockey circles is that Collins may be even better.

“You want all your players to make improvements every year, and I think Michael has done that,” Dennehy said. “He went from a guy you could put on power plays to score goals and now he’s getting penalty killing time and you see him in all situations. His skating is in great shape – he worked on it. He’s being a little more physical, he’s winning puck battles.”

With the influx of talent and presence of veteran leaders, this edition of Warrior hockey holds its destiny in its own hands. Dennehy knows that, and has faith in his veterans to make sure that message bleeds through the locker room.

“I think that’s what Blysie’s talking about – there have been times since he’s been here where we’ve lived it, and there have been times where we’ve just talked about it. I think there were times last year that we did live by that code, and there were others when we came up short of that. Those are our goals. Those are our principles. We’re trying to live up to them on a daily basis and I think that if we do that this year we’re going to be incredibly successful.”

Steps in the Right Direction 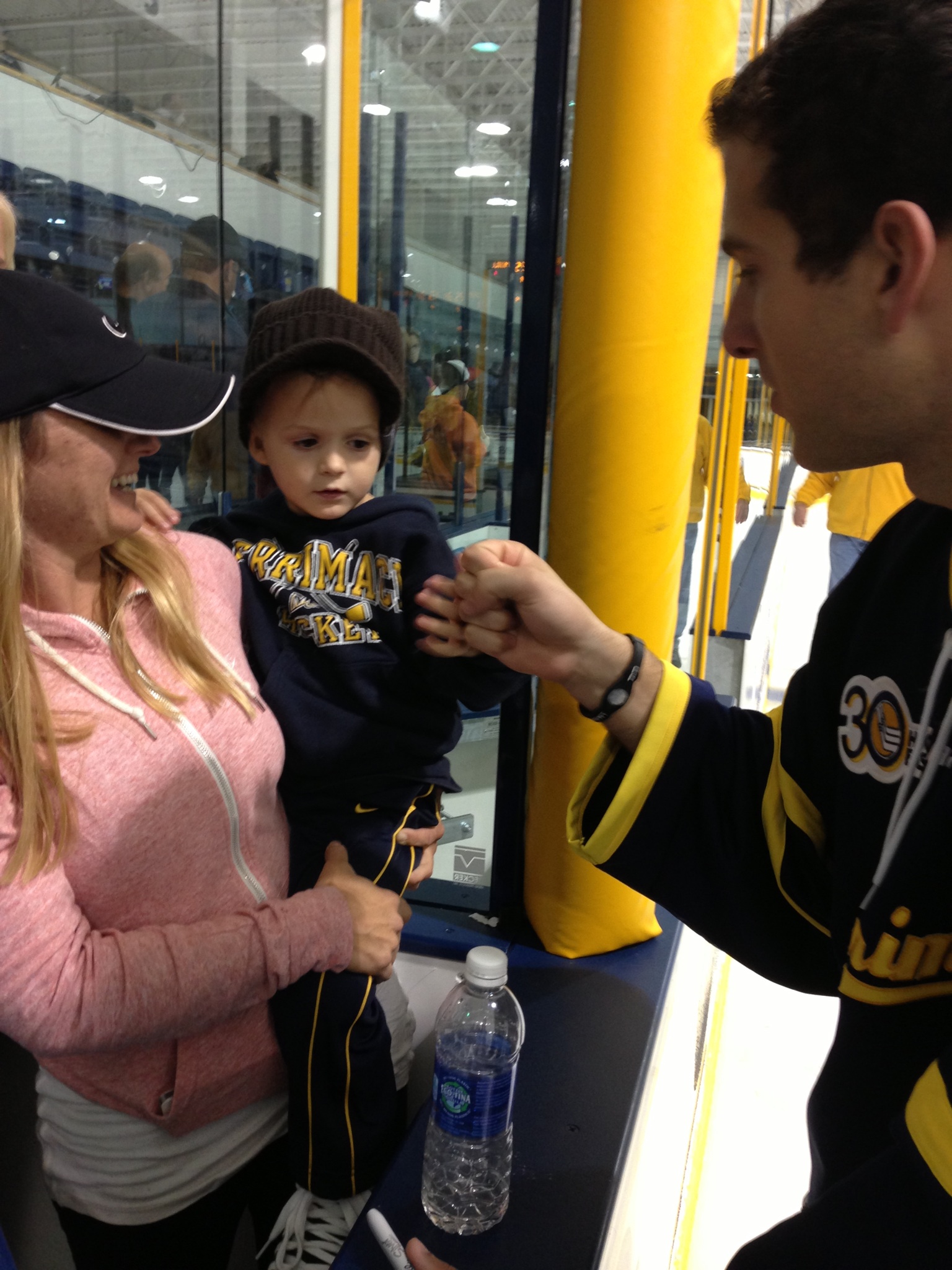 Collins isn’t the only player who has made strides this offseason. Dennehy has been impressed by the improvement of most of his team, but a few names have really stood out.

“Dan Kolomatis continues to impress on the point. I think he’ll be a leader on that front. And Justin Mansfield who really only had six months of playing defense had a whole summer to adjust and came back really strong so those are two guys off the top of my head,” Dennehy said.

Mansfield of course transitioned from the forward position midseason last year due to necessity caused by injuries.

“Shawn Bates is playing with a lot of energy. There’s highs and lows but when he really brings it he’s tough to contain – his speed is really electric. I think you’ll see more than just Mikey. You’ll see some older guys take a step and then some younger guys come into their own.”

Merrimack opens its season on the road for the second year in a row against a ranked opponent. Last season, the Warriors beat then No. 5 Union in New York before going just 1-6-3 through the rest of its conference play.

This weekend, the team travels to Denver for the first-ever meetings between the two programs. The Pioneers were tabbed at the No. 17 position, while Merrimack only received two votes total. Dennehy hopes his team can open up stronger and set the tone early, especially given that they don’t play any Hockey East competition until a Nov. 8 home game against Providence.

“We take every game the same and just try to go in with a level of confidence and if we play hard we feel like we can beat anybody. There’s no doubt that conference play means  a lot more now that we have twice as many games – if we only win two this year and don’t tie the other 12 we’re going to put ourselves in some dire trouble. We’re not going to approach them any differently but there’s definitely more importance to them.”

You may also like
Bushido: The Way of the Warrior (Podcast)
Weekend Hockey Preview – Dennehy: It's an 'Honor' to Play Army (Audio)
Women's Hockey Program To Begin Play in 2015, Immediately Jump to Division I Hockey East
Stephane DaCosta Getting Ice Time from Senators
About Post Author