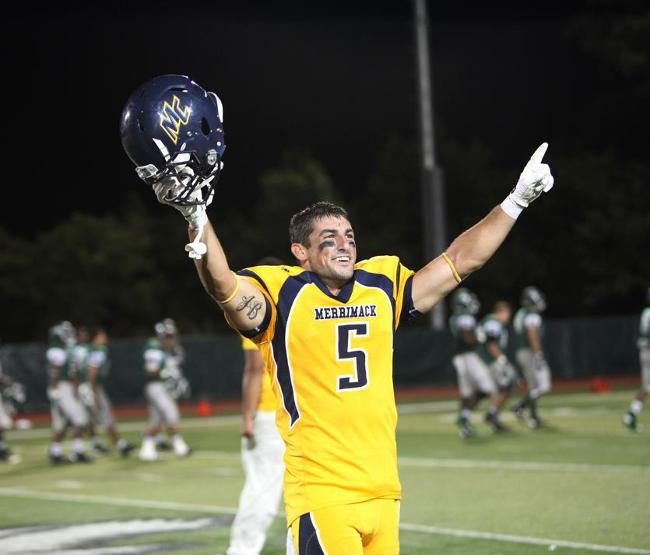 With the resignation of former coach John Perry following last season, Merrimack football was searching for a replacement. Even on his way out, Perry knew who he wanted to replace him. Dan Curran, who played for Perry at UNH, was tabbed as the Warriors’ newest head football coach after spending four seasons on Perry’s staff.

Perry is hoping to ignite a flame under the team and get them to buy into his system in his first season at the helm of a Warrior squad that features a high-powered offense with returning fifth-year senior quarterback Joe Clancy.

It didn’t take long for Curran to achieve his milestone first career victory. In the team’s opener against Division IAA Wagner College in Staten Island, the Warrior’s came out of a hard battle with an upset 42-41 victory.

Senior wide receiver Shane Ferguson caught a 3-yard game-winning touchdown from Clancy. Kicker Nick Zwaan’s extra point gave the team a lead for good against the Seahawks. Clancy went 35-for-50 with 4 touchdowns and 309 yards in the victory which ranks as one of, if not the greatest achievement in program history.

On the defensive side, junior defensive tackle Justin Hood had a big game. Hood tallied 10 tackles, a fumble recovery, and one quarterback hurry to help secure the win for the warriors. 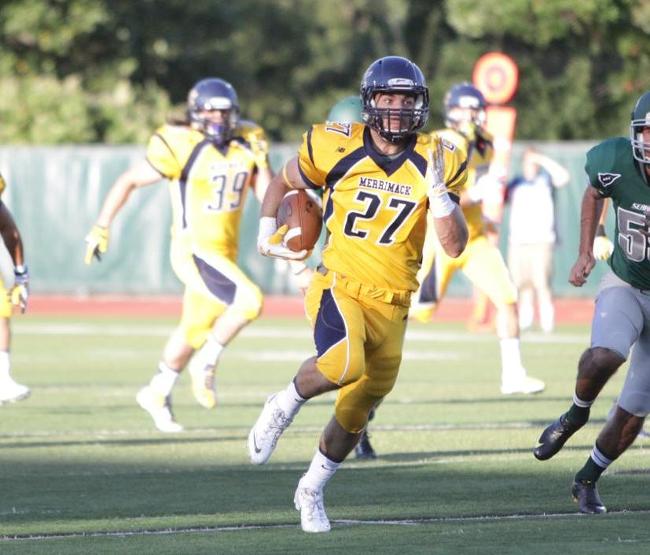 The team clearly has a lot to look forward to this season, and two seniors are already being recognized for their achievements. Clancy was named NE-10 Player of the Week for his efforts, while classmate Quinn McDonough took home Special Teams Player of the Week after he returned the opening kick 98 yards to the house to give the Warriors a quick six point advantage.

Clancy is very excited about the progress of the program under Curran.

“Coach Curran has been great for our program,” he said. “His intensity and commitment really gets the attention of our players. It becomes contagious, and he will continue to build the program stronger.”

This year Merrimack’s roster is filled from top to bottom with strong senior leadership, as well as a healthy crop of returning upperclassmen to compliment and set the standard for everyone else. For that reason, the team has a lot to look forward to.