Indecency Leads to Bacterial Concerns in the Fitness Center 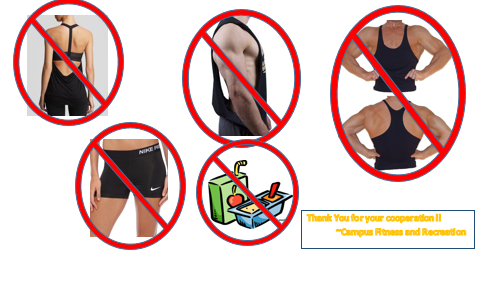 Starting this fall, the Fitness Center on campus implemented new policies and guidelines to its users. These new rules have received some criticism from Merrimack College students and staff but it is important to realize the reasoning behind them.

The new guidelines involve wardrobe restrictions that eliminate excess skin exposure. Y back shirts, cut offs and exposure of sports bras, torsos, waistbands, and short spandex are prohibited. In addition, gum, food, open drink containers and chalk are banned from the Center. These policies were implemented by Matthew Gordon, the Director of Campus Fitness and Recreation. Gordon said that, “Some people thought we were being biased or sexist but we have policed both genders the same. We have not been targeting any specific people”.

Students and staff members that are uneducated about the new policies have raised many questions. Social media users have posted comments such as, “The new rules are like Nazi Germany.”

The reason for these policies is that Gordon is actively trying to prevent the spread of bacteria in the Fitness Center due to one confirmed bacterial infection that affected a user last year. This is Gordon’s fifth year at Merrimack College and he reports that the decency of gym users has gotten worse over the years, causing these increased bacterial concerns.

Not only has the indecency increased, but Fitness Center users are not utilizing the wipes provided to clean the equipment before and after use. Gordon says that the Fitness Center purchases these wipes themselves and so it is apparent that the 700 people who use the Fitness Center each day are not cleaning it. This is alarming and students should be using simple precautionary measures to stay healthy. Gordon advises that, “If you wipe down a piece of equipment before you use it and after you use it then you’re not getting anything and you’re not spreading anything.”

A frequent Fitness Center user, Caroline Urbanek, addressed these changes. “At first I was concerned because most of my workout tops are now banned. But I was happy to see that Fitness Center employees were handing out T shirts to change into so that you don’t have to walk all the way back to your dorm room and interrupt your workout if you are considered inappropriate.”

Not only are the Fitness Center employees offering T shirts to those dressed inappropriately, but they are still abiding by strict cleaning zones that they are responsible for during their shift to ensure cleanliness.

One employee, Karlee Pedemonti said, “As an employee of the Fitness Center I’ve received a lot of questions about the reasoning of the changes in the dress code policy but once I explained it most students and faculty understood and were willing to embrace the change.”