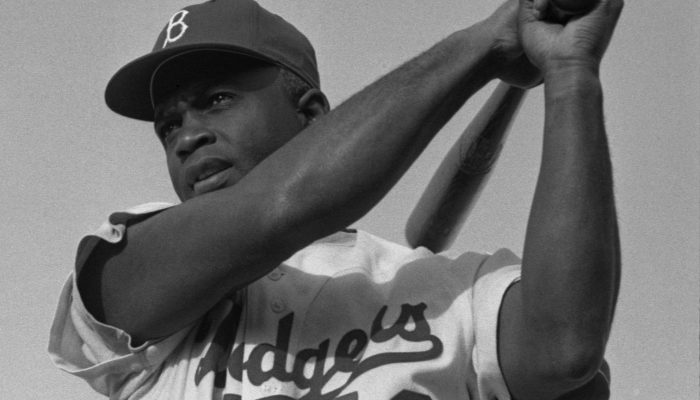 I am an avid sports fan. We watch Summer Olympics, Winter Olympics, Super Bowl, World Cup Soccer (Women’s and Men’s), World Series Baseball, NBA, tennis, rugby, lacrosse, you name it, we are watching it! In January, I celebrated my one-year work anniversary here at Merrimack College. I arrived in January 2020, was moving into my office, revving up to meet new people, my family was excited about attending Division I sports…and the pandemic hit and we went into lockdown! Try explaining to your athletic, enthusiastic 10 year old that they cannot go see the soccer team, or any team for that matter, because…well…because there is health pandemic going on.

In honor of Black History Month, my one-year anniversary at Merrimack College, and my family’s enthusiasm for athletics, I want to share some Black History and Herstory sports firsts.

But first, a little context: when professional athletics began in the U.S. almost all of the sports teams were racially segregated. The sports teams followed the de jure and de facto racial segregation of the nation. Baseball (National Negro League), hockey (Colored Hockey League), and basketball (The Black Fives) had separate leagues for the non-white players. It wasn’t until 1945 that the Major League Baseball (MLB) recruited its first African American player – Jackie Robinson. In 1946, the National Football League (NFL) began to integrate (the Los Angeles Rams signed running back Kenny Washington and receiver Woody Strode). The National Hockey League racially integrates when Larry Kwon (a Canadian of Chinese descent) played for the New York Rangers in 1948. Additionally, in 1950, Earl Lloyd took the court as the first African American to play in the National Basketball Association (NBA) for the Washington Capitols.

As you read through these Black History and Herstory sports firsts, notice how Boston has played a significant role in being first for integrating their sports teams.

Jackie Robinson holds a special place in my heart because he attended the same high school I did. At Muri Tech (now John Muir High School in Pasadena, CA) he played baseball, football (quarterback), basketball (guard), and ran track and field. Mr. Robinson is the first African American to play in Major League Baseball. His first team was the Brooklyn Dodgers and he began his career with them in 1947. Pumpsie Green was the first African American player to play for the Red Sox (1959). Sadly, the Red Sox were the last MLB team to integrate.

Althea Gibson was the first African American to win a Grand Slam title (the French Championships) in 1956. The following year she won both Wimbledon and the US Nationals (precursor of the US Open), then won both again in 1958 and was voted Female Athlete of the Year by the Associated Press in both years.

Known as the “Jackie Robinson” of hockey, Willie O’Ree was the first Black person (Canadian) to play in the NHL and he played for the Boston Bruins in 1958. The first African American to play in the NHL was Val James who started his career in 1982 fr the Buffalo Sabres.

Ron Burton (father of WBZ sports reporter Steve Burton) was the Boston Patriots’ first ever AFL draft pick. That also makes Mr. Burton the first African American player for the now New England Patriots. He was a running back for the Patriots from 1960 to 1965.

Eddie Hawkins is the first American-born Black man to play for the U.S. National Soccer team (1984). He was a midfielder (my son’s favorite position)!

Brianna Scurry (one of my personal favorites) is the first African American to be inducted into the National Soccer Fall of Fame in 2017. In 1999, she won the best goalkeeper award in the Women’s World Cup where the U.S. women won gold!

We all now Bill Russell who was a Boston Celtics superstar center. But did you know that Chuck Cooper was the first African American player the Celtics drafter in 1950? He played for four years with the Celtics. And then earned a Master of Social Work degree (YAY!) from the University of Minnesota. He went on to be the first African American to be Director of Parks and Recreation for the city of Pittsburgh (his hometown).

Dominique Dawes the first African-American woman to win an individual Olympic medal in artistic gymnastics, and the first black person of any nationality or gender to win an Olympic-gold-medal in gymnastics.

Simone Manuel became the first African American woman to win an individual medal in Olympic swimming. She is also the only woman who has ever won seven medals in a single world championships.

Well over 50 years after Willie O’Ree played in the NHL, Blake Bolden became the first African-American player to compete in the National Women’s Hockey League (NWHL). From 2016-2017 she played for the Boston Pride, the team with whom she won the Isabel Cup in 2016.