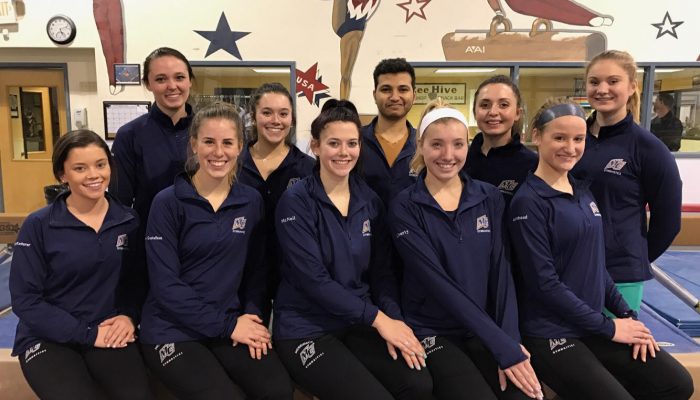 Junior Amber Gustafson has recently taken her passion by the strings, bringing it to campus for others to enjoy. The Merrimack College Gymnastics Club has most certainly sparked the interest of other students and is currently made up of 16 members, 15 females and one male.

Although all members have different levels of experience ranging from never having done gymnastics to members that have competed at high levels, it’s meant to be fun. “I actually stopped doing gymnastics when I was 12,” said Gustafson. “I’ve been around it my whole life. My sister competed from when she was 5 all through high school and college.”

Gustafson got the idea to start the club from her sister, who had started a club at the University of New England. She was helpful in teaching her sister her what tools and resources she would need to start the organization.

The team practices at Yellow Jackets Gymnastics Club and so far, have participated in two meets. Their first meet as a club was on Feb. 25 at MIT. The group placed 5th as a team, which they were very pleased with, as it was their first time completing together with varied skills.

Their most recent competition took place on March 26 at UNE, in which they did extremely well at. They placed 1st in floor and took home 2nd place all around. Many members also received individual awards for their events.

In order to get more students involved, they are hosting an open gym. At this event, students can see the gym and use some of the equipment. Next year, the team plans to go to Nationals in Texas to compete against other club teams also in the National Association of Intercollegiate Gymnastics Clubs. If you want to join, next year practices will be 1-4pm on Tuesday’s and Thursday’s.

The club is becoming more involved on campus and in the community. They will be participating at Relay For Life in April. In order to raise money for their team, they are hosting a movie night and giving all proceeds to Relay for Life.