Home > Sports > Game On: Merrimack Hockey Returns to the Ice

Game On: Merrimack Hockey Returns to the Ice 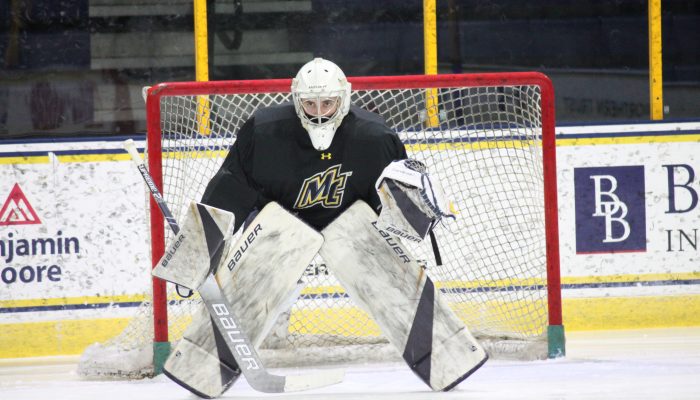 Sports are back! Hockey East announced their return to play plan on November 11. Each team in the conference will be limited to playing each other and will compete in 24 games each in the regular season. The postseason will be formatted as a double round robin format. Women’s Hockey started on November 20 while Men’s Hockey will start on December 4.

Hockey East prioritized student athlete’s health and safety going into the season. An example of this was postponing Merrimack Women’s first series against Providence College. Because of this move, Providence College played UConn instead on November 21 and 22. The league has yet to announce the new date for when the Warriors will face the Friars.

Merrimack Women’s Hockey is now scheduled to kick off their season against Northeastern at Lawler Rink. The team raised the excitement for the first week of games by taking to Instagram on November 18th and engaging in a takeover of the Hockey East story. Members of the team gave viewers a tour of their illustrious locker room, answered questions people asked, gave a behind-the-scenes look at their practice and workout routines.

“I’m most excited to play BU (Boston University) this season because it was my first collegiate game and it’s always a good rivalry,” said Captain Megan Ferguson on the Hockey East Instagram story.

The Lady Warriors had a record of 5-24-5 last season, playing big name teams like Northeastern, Quinnipiac. However they look to turn that around this season and play competitive, close games each time they hit the ice.

Merrimack Men’s Hockey is scheduled to face off against Maine in their first weekend of play, both of their games at home at Lawler Rink. They will be featured on NESN twice this season, once against Northeastern on December 12 at 6:00pm, and once against UNH on December 19 also at 6:00 pm.

They finished 9-22-3 last season, also playing big name schools like Boston College, Wisconsin, Penn State, Minnesota Duluth, and RIT. However, they look to bounce back and be more competitive this year, sticking to conference-only matchups.

In a year full of uncertainty, it certainly feels good to have hockey back in our lives. And lucky enough, Warrior Nation can watch all of the games live on CBS Sports Live. Just go to the Hockey East website for access. Here’s to a great season for our Warriors!