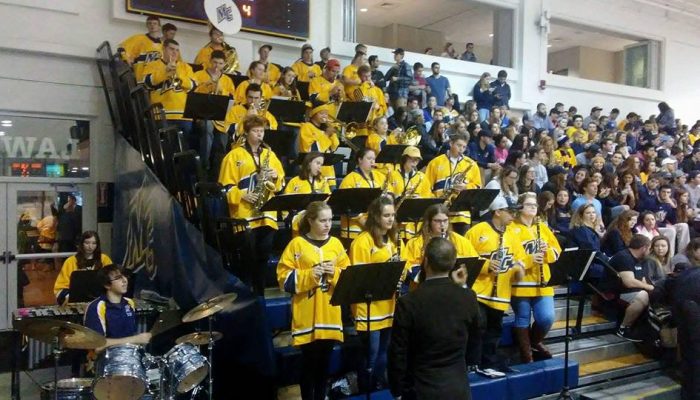 Band ten hut! The Merrimack Visual and Performing Arts Department is set to launch their first ever marching band for the upcoming sports season pending approval from the Northeast Conference.

“We always want to be providing the public with positive music experiences,” said Paul Geresy, Director of Bands in a video made by a former Communication & Media student. “We’re lucky that we get to serve our community with music.”

The musicians who are members of this band will experience something that none of them have ever experienced. Because of Covid-19 and as a safety precaution, they will have to wear musician masks and bell covers while playing their instruments. But this is done so that the band can safely perform.

“It is probably the most visible of all of the ensembles on campus,” Laura Pruett, who is an Associate Professor of Music, said in the video. “I see it as a cornerstone of the music program the Performing Arts Department because of its prominence on campus and its ability to connect our department to the community as a whole.”

During a normal year, the band would report a week earlier than the rest of the student body. However, due to the Covid-19 pandemic, marching band activities were postponed. Instead of meeting in person before school started, the bands hosted meet and greet sessions on Zoom  to build camaraderie and to allow new members to get accustomed. But band kids are used to taking conflicts and working to make sure they get solved.

It may be sooner than later that the Merrimack community sees (or hears) the Marching Band on campus, raising people’s spirits and bringing people together (in a safe way) during a time like this.