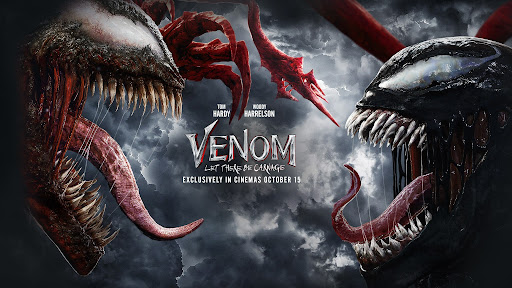 Venom: Let There Be Carnage is the sequel to 2018’s Venom, and similar to its predecessor follows Tom Hardy as Eddie Brock, a faltering journalist who becomes infected with an alien symbiote called Venom and gains superpowers. While the sequel isn’t as poorly paced or sloppily written as the first film it still struggles with developing its lead character and doesn’t feel quite fresh enough to make for a worthy comic book movie.

I am not a huge fan of the comic book character, nor did I particularly like the first film, so I had pretty low expectations going into this movie, and my expectations were pretty much met. I will say this, the film is vastly superior to the first film, it has a much better script, better directing, and Tom Hardy is much better in the lead role. The action is good by comic book movie standards, nothing incredible, but the production value is high. Occasionally, the film gets bogged down in some fight scenes that have too much CGI and the fight feels slower and boring because of it. The film’s best attribute, and the thing that will distinguish it from the first movie, is that it has a lot more Venom in it. The film takes its time to show more of the odd couple comedy that is Venom and Eddie’s relationship and these scenes are the most entertaining thing this film has to offer. Additionally, the film leans a little bit closer into the goofier comic book origins of the character and this is fun, but does cause some sharp tonal contrasts.

My biggest issue with Venom: Let There Be Carnage are certain logical inconsistencies or mistakes. The film is plagued by either things that don’t make sense or things that could make sense but are never explained. An example of the former would be that the films main antagonist, Woody Harellson’s character, is a well known serial killer who is getting a lot of press coverage, yet when he escapes from prison, he walks around on the streets of San Francisco in broad daylight, without a disguise, and nobody seems to notice him. An example of the latter would be that the Carnage symbiote infects Woody Harrellson after he comes into contact with Eddie/Venom’s blood. Then, when it is time for Venom and Carnage to fight, Venom is afraid of Carnage, because Carnage’s skin is red, even though he essentially came from Venom. It’s stuff like this that bothers me with this and the first Venom movie.

The other thing that I really don’t like about the film is that it really doesn’t do anything for the character of Eddie Brock. Venom has an arc, Eddie does not because he is the same flawed person he is at the end of the first movie, and the film makes no effort to develop him at all. Additionally, the love interest, Michelle Williams, is Eddie’s ex-fiance and at the end of the first movie she was dating another guy, and in this movie she is engaged to that other guy, yet she remains the love interest/damsel in distress. Why? What is the point of this? Either have her be single, so she can be a real love interest, or just get rid of her.

Venom: Let There Be Carnage made significant strides to better itself from the first Venom film, but ultimately has too many logical errors and plot holes to form a meaningful story. Additionally, character development  takes a back seat in favor of visual spectacle and goofy attempts at comedy that can’t quite redeem the slew of missteps in this underwhelming and forgettable sequel.

Final Score for: Venom: Let There Be Carnage