Home > Entertainment > Film Review: “The Trial of the Chicago 7”

Film Review: “The Trial of the Chicago 7” 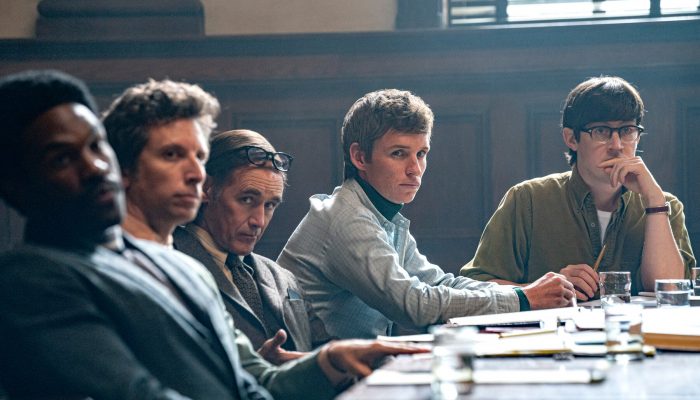 Who knows what the Oscar race will look like this year, or even if it will happen at all. What I do know is that I haven’t seen that many films that I think will be legitimate contenders. Since most of the fall releases got reassigned to next year, most of what is coming out now is whatever the studios just want to shove out the door and forget about. Aaron Sorkin’s courtroom drama is not one of those films. In the interest of full disclosure, I feel it is necessary to tell you that I am tremendously biased towards everything Aaron Sorkin does. His early 2000’s drama series “The West Wing” is my favorite television shows, followed closely by his HBO series “The Newsroom,” and he has written some of my favorite movies, including “A Few Good Men,” “Charlie Wilson’s War,” and “The Social Network” for which he won the Academy Award for adapted screenplay.

I was tremendously excited for this movie and I was not at all disappointed. “The Trial of the Chicago 7” tells the true story of the trial of seven men accused of inciting a riot at the 1968 Democratic Convention in Chicago. The film carries a deep cast with Eddie Redmayne, Sacha Baron Cohen, Jeremy Strong, Mark Rylance, Joseph Gordon-Levitt, Frank Langella, and Michael Keaton. In addition to writing, Aaron Sorkin also directed this film, only his second time in the chair after 2017’s “Molly’s Game.” Sorkin’s masterful writing and style in addition to the on screen talent, elevate this film above the average courtroom drama.

The best part of this movie, by far, is Sorkin’s sharp and intelligent screenplay that fuses Sorkin’s typical fast-paced style with historical drama. But, as fascinating as the drama is, the brief moments of levity are what really keep things fresh and entertaining, especially when the characters of Abbie Hoffman and Jerry Rubin are clashing with the establishment as they often do. Sorkin’s screenplay oozes with wit and thoughtfulness as the film carries into its second and third acts that features flashbacks from the courtroom to the riots. Additionally, I found the character of Judge Hoffman particularly interesting as he continues the tradition of  Sorkin antagonists being pretty ostentatious. Additionally, the performances are very strong. I don’t think any are a lock for an oscar win, but they are certainly strong, especially from Eddie Redmayne, Sacha Baron Cohen (of all people), and Yahye Abdul-Mateen II, who plays Bobby Seale, the leader of the Plack Panther Party.

The only real issue I had with this movie was the lack of character backstory or development in some of the characters, but the characters who do have development are the right one’s and they get their due. This film is also elevated by its time of release since the film focuses on civil unrest, which is all too prevalent today. In the absence of many other films that would compete with it, I think this movie is a serious oscar contender that cements Sorkin as the master of the court room drama.

Final score for: “The Trial of the Chicago 7”