Home > News > Entertainment > Film Review: “The Devil All the Time”

Film Review: “The Devil All the Time” 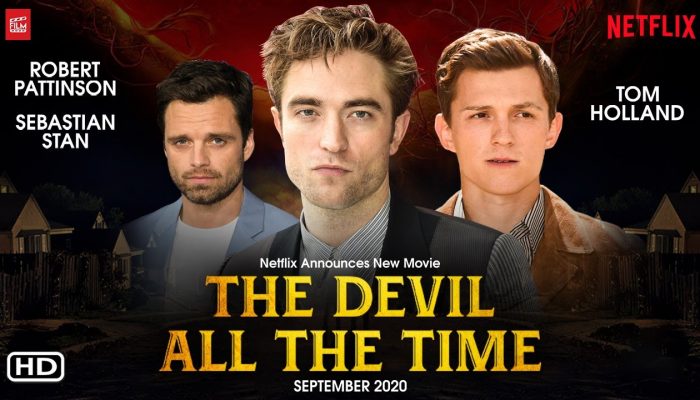 It was a long, blockbuster free summer, and with fall now in full swing, this would usually be when I expect to be going to the theater more and more. But COVID has limited the film industry to rescheduling and readjusting to streaming services, so most of the new content I’ve seen recently, and for the foreseeable future, has been through Netflix and Amazon. That is the case for Netflix’s first big release of the fall, “The Devil All the Time,” which hit Netflix last Wednesday.

“The Devil All the Time” is written and directed by Antonio Campos, based on the well-known book by Donald Ray Pollock. The movie features an all-star cast of Tom Holland, Bill Skarsgard, Riley Keough, Jason Clarke, Sebastian Stan, and Robert Pattinson. Without spoiling anything, the plot, set in two backwoods towns in the 1950s, follows several characters with nefarious intentions as their stories intersect over almost 20 years.

I’d start by saying that this movie is very competently made. Antonio Campos is relatively new to the game, and this was by far his biggest budget film. His direction, while not Oscar-worthy, seems very skilled. The same goes for the other technical elements of the film, mainly the cinematography and the editing. Nothing to write home about, but also done well enough that it doesn’t detract from the film.

The best part of “The Devil All the Time” is the performances. Every member of this cast is well trained and experienced. The standouts are Robert Pattinson’s, snively and mysterious priest and Tom Holland’s exceedingly dark and brutal high school student. I viewed Holland’s presence in this film in a similar way I did with Chris Evans’ performance in 2019’s “Knives Out”. Evans was looking to shed the morally righteous character type he had garnered from years as Captain America so his very next role was the nefarious Ransom Drysdale. Similarly, Holland looked to shed the innocent and childish character type he had garnered from years as Spiderman took this role, and for the most part, he nails it.

My main issue with this movie stems from the writing and the characters. I haven’t read the book that this is based on, but it is my understanding that the book is in the realm of 500 pages long, so fitting a story of that size into a two-hour film will naturally require making some cuts. The problem is that there are so many characters who’s stories aren’t related for most of the movie, none of the characters have enough screen time to develop or have an arc. Even the main character doesn’t have any development, he is just the way that he is, and nothing seems to change that even though he is doing some reprehensible things.

Another issue that I discovered is that this movie doesn’t have any characters to identify with and it also lacks a compelling hero, if a hero can be named at all. Every character in this movie is either a ride or die evangelical, a pedophile,  or a murderer, and some are all three, so there isn’t anybody for the audience to connect with or route for. Additionally, The film doesn’t have a true hero. I think maybe they thought they had one when they were writing the movie, that Tom Holland’s character was the natural hero to this story, but as I mentioned he is doing some pretty awful stuff, and the character also isn’t fun or charismatic, so I can’t even consider him an anti-hero.

This movie is what is called a slow-burn thriller, similar to films like “No Country For Old Men” or “prisoners”. In this genre, you’re supposed to grit your teeth as we get through the first hour and forty-five minutes of the film that is full of character development and suspense so that the last fifteen minutes are full of brutal violence, action, and unexpected twists. I like to think of these movies like chess games, the first thirty moves are for putting all the pieces in the right place and the last five are for executing the plan and forcing your opponent into a checkmate. Unfortunately, because of the lack of character development, I found that by the end, I lacked interest in the characters, so instead of a swift and skillful checkmate, the climax felt more like a boring and predictable stalemate.

I also find this issue sort of paradoxical because the movie could have used a longer runtime to develop its characters, and if it had done that, I probably would have liked it more. But at the same time, the movie was already two hours long, and if it had stretched its slow-burn style and an extra half hour, I probably would have gotten bored. Ultimately, I found that the component technical attributes of the film and it’s strong performances couldn’t redeem the broken plot and unexciting finale.