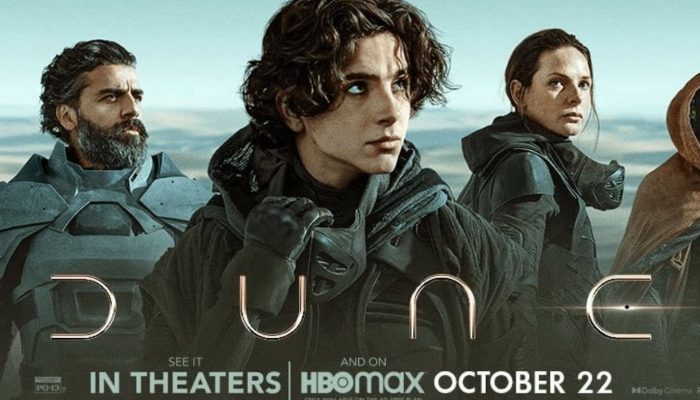 I am a huge fan of Herbert’s original novel, and a huge fan of science fiction in general, so naturally, I was very excited for this film. Combined with my admiration of Villnueve and a stellar cast of Timothee Chalamet, Zendaya, Rebecca Furguson, Oscar Isaacs, Josh Brolin, Jason Momoa, Dave Bautista, and Stellan Skaragard, this movie was like catnip for me. In terms of book accuracy, this is one of the most faithful adaptations of any story I’ve ever seen. Aside from a few omissions of extra scenes, the film is pretty much right there with the book.

From a technical perspective, this film is virtually flawless. Villnueve’s direction is masterful as usual, the cinematography and special effects are staggering, the editing and sound were on point and Hans Zimmer’s thundering score is a constant embodiment of the alien worlds we find ourselves on. The cast, is very good all the way through, Chalamet plays the protagonist, Paul Atriedes, brilliantly, Oscar Isaac and Jason Momoa are also very good, portraying two characters who are very charismatic, but the stand out for me was Stellan Skarsgard, who played the main antagonist, Vladimir Harkonnen. Skarsgard lathered in makeup and prosthetics and is filmed in darkness and he is truly menacing.

The scale of this movie is one of it’s most extraordinary elements. They put a lot of work into making this world feel big, whether it’s lots of people in a shot or adding people in the foreground of a shot for scale, everything from sweeping desert landscapes to conference rooms, feels grand. Also the production team, really out did themselves. Everything has a very realistic feel to it, there is dust and imperfections in the sets that make things feel ancient, which I really appreciated because that feeling of ancient culture is one of the things that makes the book so special.

The film also has a ton of exposition to get through in the first half hour and this does move a little slowly, but it picks up soon after. All things considered, for the amount of exposition there is, I feel that Villnueve did the best that he could with that task. This film’s only flaw is that it isn’t a full film. Dune pt.1 only covers about the first 300 pages of a 500 page book, so it does very much feel incomplete. For someone who knows the story, it doesn’t bother me much, but it could be off putting for someone going in blind.

Dune is a technical masterpiece and is sure to nab a slew of award nominations, its real test will be at the box office. If this movie performs well, or at least better than most movies in the COVID era, then the second part will be greenlit by Warner Bros., if it doesn’t then they will likely kill the project, which might just kill me. To the viewers, I say this; Please, if you want to see Dune, and you feel comfortable with it, go to the theater, see it in Imax if you can. It is worth it, and this story deserves to be told in full. To Warner Bros. Studios, I say this; I hate you. COVID hasn’t been easy on you, but the carousel of misguided decisions is too much to ignore. You had Christpher Nolan, one of the best working directors, in your own house, and he asked you not to release Tenet at the height of COVID in the US, and you did, and who would have thought that it would bomb. Now Nolan is moving over to Paramount, and you’ll never see the money from any future Inceptions or Dunkirks he will make. You own the rights to some of the most popular and iconic superheroes in media, and you can’t get a cinematic universe past the crawling stage. And yeah, the new Batman movie looks kind of cool, but what, there are two Batmen now, Affleck and Pattinson. I don’t know what I’m supposed to believe, and I will not forgive you what you did to Wonder Woman over the summer. And let’s not forget the HBO Max deal, where all of your theater releases get a simultaneous release on streaming so people don’t have to go to the theater. In other words a deal that could only possibly serve, to threaten the stability and success of the business upon which your livelihood depends. With god as my witness, If Dune does not perform at the box office to the level that it deserves or the level that warrants the second part, because of your stupid HBO max deal, I will never see a Warner Bros. picture in the theater ever again. End of Rant.

Dune is a masterfully executed and technically marvelous film, that is an almost faithful adaptation of it’s iconic source material. While it is left without an ending, that will hopefully be seen in a future project, the characters and scope of the film alone, will make it a favorite of sci-fi fans and cinema lovers alike.