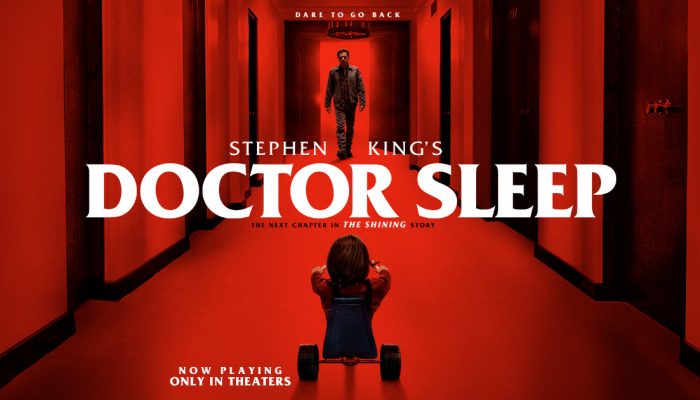 “Dr. Sleep” (2019), directed by Mike Flanagan, manifests countless forms in its approach as a horror film. The picture is an adaption of the 2013 Stephen King story of the same name, which in turn is a sequel to King’s renowned horror masterwork: “The Shining” (1977). Likewise, the movie also discovers a creative middle ground, where it works not only as a follow-up to the novelization of “The Shining,” but also the widely acclaimed Stanley Kubrick iteration with Jack Nicholson that released three years after the book.

The film stars Ewan Mcgregor as Danny Torrence. Following the traumatic events he experienced at the Overlook Hotel during “The Shining” (1980), Danny became a low-life dipsomaniac looking to suppress his powerful psychic gifts by self-medicating. However, after seeing the error of his ways, Danny later meets and befriends a New Hampshire man by the name of Billy (Cliff Curtis), who reluctantly becomes Danny’s AA sponsor. Billy, in a move of generosity, even goes as far as lending Danny a roof over his head in exchange for very cheap rent. After landing a hospice job, Danny seemingly finds a purpose for his life when he begins comforting sickly patients right as they die, garnering the nickname of “Dr. Sleep.” Danny, moving forward, also utilizes his gift to communicate with a little girl named Abra (Kyliegh Curran), who possesses the same telepathic abilities that he does. The central conflict of the film involves Danny and Abra coming together to take down Rose the Hat (Rebecca Furgeson), along with her gang of cohorts who use the shining for evil—feeding off the lifeforce of young, gifted children.

“Dr. Sleep” (2019) certainly has a lot to live up to as a continuation of one of the most influential films of all time. Of course, no sequel will ever surpass or stand on the same level as the original Stanley Kubrick flick; that’s simply an unreasonable expectation. However, in spite of that reality, this film still comes close and proves itself to be a worthy follow-up to its classic predecessor. Each member of the cast delivers robust and satisfying performances, but Ewan Mcgregor, in particular, steals the show as Danny Torrence. Mcgregor does a stellar job of capturing the essence and spirit of his character, and I legitimately bought him as the troubled, psychologically-damaged adult version of a little boy we saw in a nearly 40-year-old film. Kyliegh Curran also immensely adds to the film’s quality through her role as Abra. Usually, child actors are subpar at best, but Curran, to me at least, came off as very intelligent and likable. Her chemistry and back-and-forth with Danny, her mentor, was by far the most substantial element of the film. I see a very bright career in store for the young and talented actress.

The film is stunning in terms of editing and cinematography. The director, Mike Flanagan, was responsible for both, and when watching the picture, it is extremely evident how much work he poured into the shots and the pacing. The film, unlike many horror films of this generation, relies on suspense and discomfort, as opposed to loud, lazy, and annoying jump scares that modern movie-going audiences are so accustomed to nowadays. Often, shots will linger on disturbing imagery for extended periods, which will undoubtedly lead to them becoming ingrained into the human subconscious. The effort on Flanagan’s part to emulate Kubrick’s directing style is apparent in many aspects of the film (e.g., the unsettling music, the eerie imagery, the extensive use of tracking shots, etc.).

Flanagan is also exceptionally talented at writing three-dimensional characters and providing them with enough screen time for efficient character development to set in. Danny and Abra, specifically, have a lot of depth and personality. Their believability as real people makes it much more interesting to see how they mentally process the sufficient instances of horror and dread that the movie exhibits to the audience on a silver platter. The film also works in the sense that Rose the Hat, along with the side villains, are very compelling and elaborate. The movie does a terrific job of establishing their impulses to commit the horrific deeds we see. I found myself loathing these people around the end of the second act (in the correct way one should when watching a movie). I didn’t hate them for lousy writing or weak motivation; I resented them for the same reason I would dislike a terrible person in real life, which is what villains in fiction are supposed to do.

I’m very pleased to say I have little-to-no complaints about the film. However, if I were to detail what I did have problems with, I would say the fan service toward the end of the third act gets to be a bit much. As I was watching, I appreciated Flannagan’s effort in not falling into the trap of other directors honing sequels to outstanding films. What do I mean by this? Well, frequently, filmmakers will bog down their sequel with constant callbacks and references to the previous, more successful film. As a result, the sequel tends to become rather shallow, exhibiting a lack of purpose and identity. If the writer and director aren’t careful with how they handle their throwbacks and references, they will start to come off as pathetic husks that are living in the shadow of greatness (*cough* the “Terminator” franchise *cough*).

As I mentioned previously, “Dr. Sleep” (2019) tends to avoid that mistake, but only partially. The callbacks to “The Shining” (1980), at first, were subtle, and it didn’t detract from the film finding a voice to stand out on its own. However, when Danny and Abra go to the Overlook Hotel during the climax, references to the first movie start flowing like a river of blood flowing out of an elevator. The film, when revisiting the Overlook in Colorado, slowly devolves into doing the following: “Oh look! Remember the door Jack Nicholson axed through? Remember the creepy little girls standing in the hallway? Remember the elevator spilling out the gallons of blood? We do!” The movie, I feel, tries too hard in the final act to wring nostalgia out of people who liked “The Shining” (1980).

However, thankfully, by the time the movie gets to this point, Flannagan has already won me over with terrific characters, excellent writing, and a highly satisfying story that mostly stands on its own feet. My opinion on fan service might also differ highly from others. Some may see the constant winks and callbacks to be a welcome addition to the film, which I understand entirely. And, to restate once more, the movie carries enough original substance in the first two acts to appear as its own unique thing, which I appreciated to a high degree. Therefore, the presence of fan service is only a minuscule, nonlethal complaint.

Overall, I found the film to be a very pleasing follow-up that acts as a beautiful companion piece to its highly renowned older brother. The film has everything one would want for a sequel to such a classic piece of horror cinema. It holds an engaging story, well-done writing, well-constructed characters, terrific scares, fantastic cinematography, and a plethora of callbacks and references that, while slightly bothersome for some, may come off as a treat or a special bonus for fans of the Kubrick flick and the King novel. All in all, I give “Dr. Sleep” (2019) a rating of 9/10. Check it out!