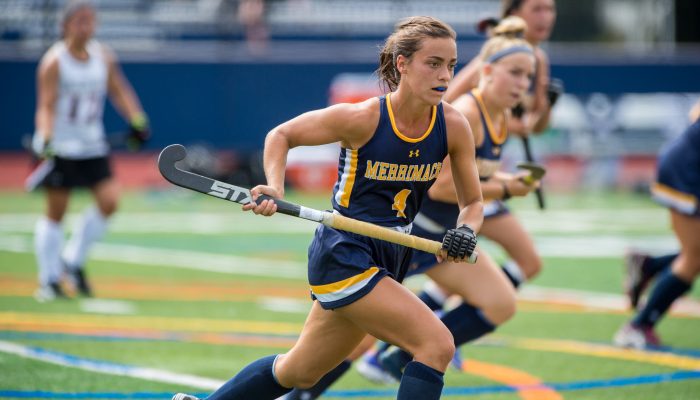 Merrimack field hockey picked up their first win of the season on Sunday, October 10 at Duane Stadium in an overtime thriller. Their first victory since 2019 came against the Red Flash of Saint Francis who are based in Loretto, Pennsylvania.

The Sunday morning contest had all of the theatrics. The Warriors got the scoring going in the second quarter with a rifling shot from Julie Wester that found the back of the cage. That goal was Wester’s fourth of the season and she is now tied for the most goals on the team with Katelyn Bennett at 4. Anne-Sophie Hogenboom got credited with the assist.

The fourth quarter was when things really started to heat up. Vanessa Kaddaras scored a  deflected shot by Erica Spallone, ultimately getting credit for the goal giving Merrimack a 2-0 lead at 48:50. Spallone and Hogenboom both had assists. Shortly after, Saint Francis responded with back-to-back goals a minute apart from each other, tying the game at 2.

The overtime period was nothing short of magical. Six minutes in, Jane Bonazzoli fed a penalty corner to Hogenboom who fired it home for the game winning goal and the first of her collegiate career. Hogenboom ended the game with a goal and two assists.

The netminder for Merrimack, Riley Brown, had a career day in the crease. She tallied 16 total saves, helping her team achieve victory. She had key saves in the fourth and overtime period which helped keep Merrimack in the game.

The Warriors’ next home game will be on October 22 against Bryant at 2:00 p.m.