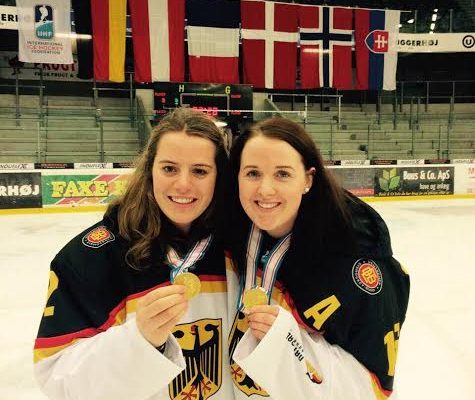 This year the Merrimack Women’s ice hockey team made a tremendous step going from a club team to a NCAA Division 1 team while joining the most elite conference, Hockey East. Merrimack had some exclusive players on the team, one of them being Marie Delarbre.

Delarbre is from Fussen, Germany. She started playing hockey at the age of eight. She quickly excelled at the sport and began playing for the U18 team for Germany. She started playing for the U18 team in 2009, 2010 and then in 2012 the team finished fourth, however she won the MVP both times. She won a gold medal in 2011 and was Germany’s youngest player to win a gold for the Division 1 World Championships held in Germany.

Most recently Delarbre helped her team to first place in Division 1 World Championship, which took place in Denmark at the end of this past March. The first place finish means the Germany Women’s National Team can now move back up into the top division of international competition with the world’s best in the United States and Canada.

When asked about her team’s first place finish, Delarbre replied, “It is always such an honor for me to represent my country at any National Team games and tournaments. Being able to stand on that blue line and hear your national anthem play and being a gold medal champion, you dream of that. And then to be able to accomplish that with your friends and teammates and actually win a gold medal and represent your homeland it’s an amazing feeling.”