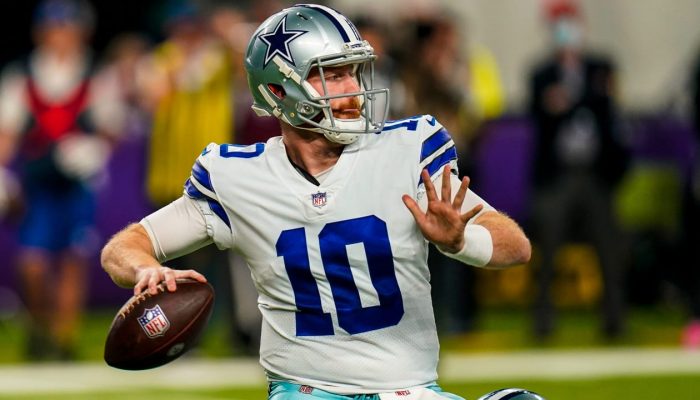 Dallas Cowboys quarterback Dak Prescott injured his thumb on his throwing hand during Sunday Night’s loss to the Tampa Bay Buccaneers. Dallas wasted no time in rushing Dak Prescott to surgery with an initial timetable expecting him to miss 6-8 weeks of action, per ESPN’s Adam Schefter. Where can Dallas go from here to try and save the season? Let’s take a look.

The most likely option is Cooper Rush, the backup quarterback already on the roster for the Cowboys. Rush has been in the league for five years, all with the Cowboys. He has played in 11 games while only starting one in 2021, and he has 63 career pass attempts to his name. Rush has yet to prove himself as a trustworthy option, and the Cowboys should look at external options to keep their season afloat.

Garoppolo is on an incredibly affordable contract now, carrying a base salary of only $6.5 million, and is by far the best option for Dallas. I’m sure Garoppolo would want to go to Dallas where he can start for a month to two months and potentially earn himself another nice payday in free agency. There are only two potential problems. First, Garoppolo has a no trade clause in his deal, so he would have to waive it to go to Dallas. Although, an opportunity to start seems appealing enough. Second, would the 49ers help one of their historic rivals? Sure for the right price, but would Dallas be willing to pay what is required to secure Garoppolo’s services in a time of need? This second issue is what would torpedo any potential deal.

Oddly enough this is both more and less realistic than Jimmy Garoppolo. The Steelers were entertaining offers for Mason Rudolph this offseason, and he’s currently their third quarterback on their depth chart. During 2019, the year Ben Roethlisberger missed due to an elbow injury, Rudolph showed that he can win games with a good team around him. He could find a way to keep Dallas around .500 until Dak can comeback. But do the Cowboys actually want him? He would be a clear upgrade over Cooper Rush, but enough of an upgrade to get Dallas to pull the trigger? Only time will tell.

This would be the ultimate Jerry Jones move, getting Romo away from the booth for one last go. Do I think this will happen? Not at all, Romo is making more in the booth than he did as a player. Do I want this to happen? Absolutely! It would be an incredible story and a fun one as well.

Ultimately, with their best potential option being a trade with a historic rival, this could very well end up being a lost season for the Dallas Cowboys. Maybe Cooper Rush will surprise us all, but with him at quarterback this Cowboys team is one of the worst in the league.