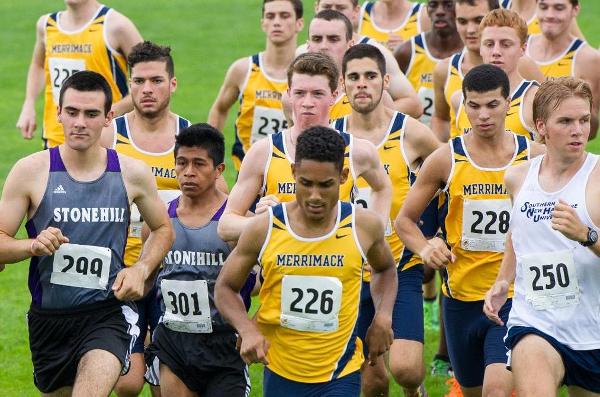 This season the Merrimack cross country team has been looking to build the program to it’s full potential and try to get to the top of their conference. The team this year looks a lot younger than teams of the past. The men’s side has seven new faces while the women’s side has 10 freshman. The shot of skillful youth maybe just what this team could use to get where they want to be. So far this season both teams have seen success early on this year. In fact, both the men and women have finished in at least the top five in every meet.

The women have enjoyed success but have also had to deal with nagging injuries to a few of their runners. These injuries have hurt the team results in a few different races.

“On the women’s side we haven’t had our full team run together,” said head coach Chris Cameron. “We’ve been battling some injuries which has hurt our team results.  If we can overcome this, I think we’ll be fine.”

“For the men, we’ve had a nice start. 3 out of our top 7 have been freshman which bodes well for the future,” said Cameron.

There have been a few runners on each of the teams that have impacted the teams greatly this year. The underclassmen for the women have really fit in well and have really led this team to where they are this season.

For the men it’s been a balance of upperclassmen and their younger runners that have really helped out and provide the balance to the team. Like the women’s team the freshman have also contributed nicely to the program.

“For the men it would be hard to pick one,” stated Cameron. “Evan Vadenais and Luis Cruz have really stepped up their game. James Wegman and Phil Harris have come along nicely and the freshman trio of Christian Gentile, Connor Murphy, and Keith Steinbrecher have been a pleasant surprise.”

Both teams have been injected with a great amount of youth. These freshman have stepped in nicely and have been a pleasant surprise to the Merrimack cross country program. The men have had three of their top seven runners are their freshman.

“Christian, Connor, and Keith have had nice starts and will definitely continue to help in the future,” Cameron explained.

The women’s team has also had three of their freshman run in their top seven, and have fit in well for Merrimack. “For the women, Randa Griffin, Kylie Reardon, and Katie Irwin have run in our top 7 which is a good sign,” stated Cameron.

One of the most successful races this year for both teams was the Kirsh Cup. The women’s team finished first while the men’s team took third losing to two highly ranked opponents.

“Both teams ran much better at the Kirsh Cup on 9/13.  The women won and the men finished third to two nationally ranked teams, losing to one by only 3 points,” said Cameron.

Heading into the ladder half of the season it’s all about getting healthy for both teams. It’s about the younger runners continuing to develop and get better and for the veterans to help lead the way.

“At this point it’s all about getting everyone healthy and training consistently,” Cameron explained. “If we can do this, I think we’ll have a good last month of the season.  We ran well in some of the earlier meets but I still feel there’s plenty of room for improvement.”

“It’s exciting to have such a large, young team on both sides,” Cameron explained.

As they approach the final month of the season the Warriors will next race in the New England Championships at Franklin Park in Boston this Saturday.