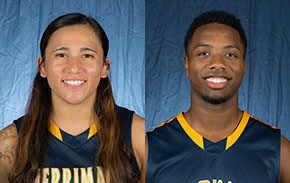 Business major with a double concentration in management and marketing.

The most memorable game of my college career at Merrimack has definitely been freshman year quarterfinals at Stonehill. We upset the second seeded team in their home gym. It was a huge game and I’ll never forget the atmosphere that night.

Coming in as a freshman I think I was more like a sponge and ready to learn everything that was thrown my way. My role on the court was to provide a spark for the team whether that was defensively or offensively. Now as a senior I feel more as a mentor and leader to my fellow teammates. After years of being molded by upperclassmen I feel like it’s my turn to do the molding so that Merrimack Women’s Basketball standards will always be held high. On the court I feel like I have to contribute on both ends of the floor in any way I can.

Our team goal is to always win a NE-10 title and receive a NCAA bid.

We’re a unique group of girls this year. We’re fast and I think that’s something our conference doesn’t see too much of. We’ve been preparing since September and have always focused on being the mentally tougher team. We’re mentally tougher because we are physically tougher and that’s how we’ll achieve our goal this year, by outlasting our opponent.

I’m from a city named Laurel, Maryland. It’s right in between Baltimore and Washington, D.C.

I’ve been playing basketball since I was 5 years old at my local Boys and Girls Club.

My junior year we played at Saint Michael’s. We had a really good game and ended up winning, but afterwards we found out that another team had lost their game, which allowed us to make the playoffs. The excitement we had as a team when we got the news is something I’ll never forget.

Gaining a lot of experience over the past few years has helped me mature as a player and the game has really slowed down for me. I make smarter and better decisions, while also leading the team.

As a team, our goal is to win the NE-10 championship and then go deep into the NCAA tournament this year.

To achieve these goals, we know that we have to practice hard everyday and make sure we get better as a team every time we step on the court.