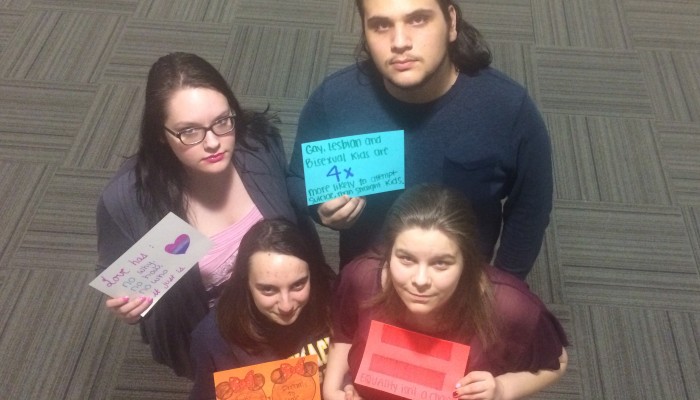 Merrimack College police is investigating what the Gay Straight Alliance (GSA) is calling a “hate crime.”

Members of the GSA executive board spent two hours Tuesday hanging an estimated 250 “Flags of Love” — hand-drawn symbols of love and messages of support, done on various colors of cardstock. The group painstakingly pieced the flags together and color-coordinated the pages to form a large rainbow flag in the front window of McQuade Library.

Within a few hours the 250 flags were gone, allegedly taken down by a lone person at about 3 a.m., said GSA President Sarah Schott. College officials confirmed that Merrimack College Police is investigating the incident, but refused to answer questions about whether they have a suspect and whether that person will be charged with a crime.

“We received a complaint this morning (Wednesday, March 30), and since then our officers have been investigating this matter. We will continue to investigate it fully to its conclusion,” said Merrimack College Police in an e-mailed statement.

GSA Vice-President Megan DesAutels said she was “really surprised” to learn from officials that the flags were deliberately taken down by one person.

“I was really hoping it was an accident, someone cleaned the windows or they started falling off, but that obviously wasn’t the case,” DesAutels said. “It was disappointing, but one tasteless act doesn’t affect the community.”

The GSA contacted The Beacon to report the incident, calling the act “deliberate” and a “hate crime.” A hate crime is defined by the Federal Bureau of Investigations as a “criminal offense against a person or property motivated in whole or in part by an offender’s bias against a race, religion, disability, sexual orientation, ethnicity, gender, or gender identity.” The Gay Straight Alliance (GSA) is a group on campus working to fight for equality between the different spectrums of sexual orientation, as well as working on building allies through the Merrimack community.

The Flags of Love event started four years ago as a way “to give people a voice and give an honest message to show their support for equality,” said GSA member Luis Felipe Penteado Bartol. The GSA spent a week on the campus “Main Street” asking students and faculty to write a positive message of love and support. Members collected 250 and created the flag in the library window.

DesAutels was the first person to notice the flags were missing. It was 10 a.m. Wednesday, just hours after she and others had spent two hours hanging the flags. She said she walked by the library and noticed that the flags were no longer there, but said it took her a few minutes to process that the flags were gone. She questioned a librarian who was unaware the display was gone and the librarian then decided to contact police. She said the librarian e-mailed the department, asking if it was possible that maybe facilities had removed the flags to clean the windows.

Schott said police and college officials responded and helped the group search nearby trash barrels and recycling bins for the flags. She said she was later told by officials a person wearing black pants, gray sweatshirt, and a red hat was caught on security cameras making several trips in and out of the library about 3 a.m. Video surveillance showed the suspect walking out of the library lounge where the flags were hung , Schott said.

The McQuade Library is open 24 hours a day during the school week. Schott said the librarians told officials they did not see anyone taking down the display. Schott said not even a piece of tape was left behind on the window after the person took the flags down.

Schott felt “destroyed” when she found out about the flags. However, she was happy with how the school handled the incident.

“With the way the people stood with us today like the Provost’s Office, and the librarians, and MCPD, I think it showed that we’re not alone and that we have their support. That meant a lot today,” Schott said, “As a group we can just build unity out of this and prove that we’re stronger than one person, and that (the person responsible) is 100 percent outnumbered.”

The group’s goal is to have 1,000 new flags contributed by students, faculty and staff by next week. For Schott, the hardest part was having the work of 250 people destroyed.

“We’re sorry for the people who made flags. We ask them to come back and to make another flag to show their commitment and that they are an ally and to prove that we are stronger than this,” she said, “We still have a voice and our voice deserves to be heard.”