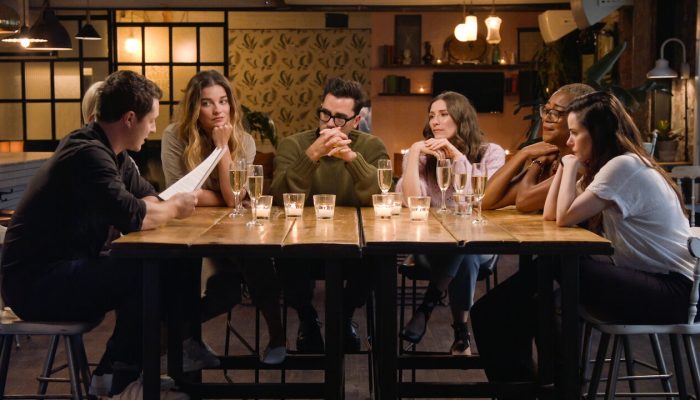 Schitt’s Creek: Best Wishes, Warmest Regards series farewell is an hour-long documentary that features interviews with the cast and celebrity fans, behind-the-scenes footage of the final season, and never-seen-before footage of the cast from audition tapes to inside the wardrobe. This special takes an inside look at the sixth and final season of the heartfelt comical sitcom Schitt’s Creek.

As many fans of the show can agree Schitt’s Creek changed the minds and hearts of television forever. Amy Segal, the director of Schitt’s Creek,  put together this tribute right after the final season aired. Similar to the show, the special came with many laughs, but also, a lot of tears. Segal perfectly captured everything there was to love about the Rose family.

Throughout the interviews, you learn how the show’s creator and star, Daniel Levy brought the idea of the show to his father, Eugene Levy. According to the father-son-duo, casting is one of the most important elements of a great show.

Catherine O’Hara, who plays Moira Rose, has always been Eugene’s “first choice” since they worked on various projects together. O’Hara agreed to work on the pilot to get the show potentially picked up. The actress remembers being promised, “It’s just 15 minutes and even if it sells, I won’t bug you about doing the role.” Of course, the pilot shortly got picked up. The Levy’s went straight to O’Hara telling her we can take it “one year at a time, and if it’s not gonna work, it’s not gonna work.” O’Hara “said yes, and the rest is history.”

During the special, we see one evening at the Trade gay bar in Washington where some of the cast witnessed a “Night of 1,000 Moiras” when attendees dressed in their favorite Moira drag in celebration of the gay icon. Moira is loved by the gay community for her over-the-top attitude, always looking dressed up, and being self-involved.  The night was incredible because there were so many people in the LGBTQ community who love Schitt’s Creek and love what they represent.

The documentary goes into the many watershed moments for LGBTQ storylines displayed in the show. Johnny Weir, a figure skater, and celebrity fan of the show, believes the community loved the show because the presence of LGBTQ characters “isn’t questioned, it isn’t a big deal, and that’s what makes it so great.” Dan Levy went into how writing his own character, David as a queer character “was just something that I wanted to do. I didn’t do it to make a political statement. It’s just who he was in my head, and I was shocked by how novel it seemed to people.” During the documentary, Noah Reid read a letter from a group of moms with LGBTQ kids aloud to the cast that thanked them for making the world a better place, which brought the whole cast to tears.

The documentary talked about the iconic scene when David comes out to Stevie. David said, “I do drink red wine. But I also drink white wine. I like the wine, not the label.” Dustin Milligan, who played Ted Mullens in the series said, “I loved that scene. It was so eloquently and natural within the scene without it being too preachy or anything. It says so much about the message of the show, which is about representation and inclusivity.” Dan Levy talked about how he got a tweet from a guy that used the wine metaphor to come out to his family. Levy said, “I thought that was a pretty amazing thing.”

Phillip Picardi, a journalist, and fan of the show recalls another scene where Patrick sings to David. Picardi remembers it as such a beautiful moment. He explains, “When we see a gay relationship on screen they are often portrayed through a lens of tragedy, strife or struggle.” The scene felt like a moment where the LGBTQ community could see themselves just being in love and being joyful. David’s character also makes hints at homophobia. What I mean by that is, David has this gay archness to him or this idea that he will never find love. At that moment you can see that archness break. This is such a meaningful moment for people in the LGBTQ community or people who know that feeling from the inside out. It was a very moving and a big moment for queer representation in television history.

As you watch the documentary you are able to see the last table read of the final episode of the series. While you watch, you can see everyone at the table slowly shedding tears. O’Hara explained, “We don’t watch each other shoot every scene. But in the table read, when you read the script, you’re there to watch every character do their scene. That was killer.” By the end of the table read everyone was looking around to see their fellow cast members crying. The saddest moment was when the final line of the script was read aloud for the room and everyone applauded: “We watch the car continue down the road and into the distance. End of series.”

Schitt’s Creek has created a better world than we live in. With inclusivity not being questioned and learning the meaning of love for family and friends every episode. I believe the documentary captured the message of the show and how much of an impact it has had our society so well.