Home > News > Armed Clown Sighting Turns Out To Be Hoax

Armed Clown Sighting Turns Out To Be Hoax 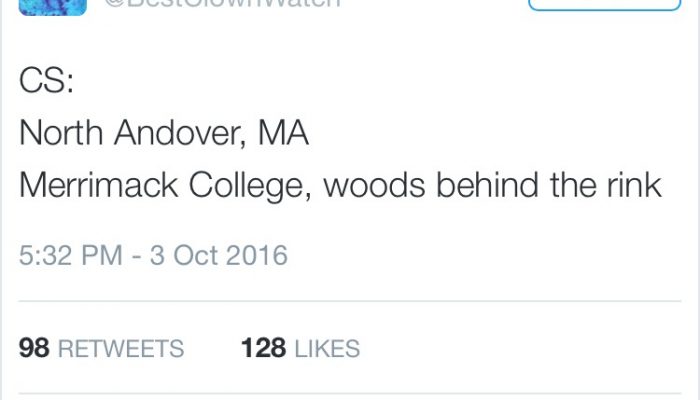 An e-mail, text, and phone call from Merrimack’s RAVE Alert system advised students to shelter-in-place until further communication from the college. Students were evacuated from residence hall Monican Centre. The clown was allegedly wandering Monican.

Senior Nicole Monahan and her roommates had just been talking about the “clown phase” circulating around social media when they first heard word of the on-campus rumor.

“We were nervous at first, but felt safe being in our room with the doors locked. It also helped knowing that our police department is in the basement of Monican so we trusted that they could act quickly if a threat did occur,” said Monahan.

She and her roommates were relieved to find out the incident was only a “sick joke.”

An e-mail from President Christopher Hopey stated, “The Andover, North Andover and state police responded in force, and joined Merrimack College officers in this search, which found no suspicious person or activity, and no weapon.”

Almost 30 minutes after put into place, the shelter-in-place was lifted and students were advised to go back to normal activity.

Hopey’s e-mail also addressed that the rumors started on social media from a “Clown Watch” Twitter account that takes submissions from users about clown sightings.

This week, several other colleges received reports about possible clown sightings on their campuses. UMASS Amherst, UMASS Lowell, Emmanuel College and University of New Hampshire are among the colleges with reported clown sightings.

Senior Cole Ruley is not impressed by the clown social media hoax that has taken stage on many college campuses.

“I think it’s absurd, I think it’s creepy, and I don’t really know what to think of it,” Ruley said. “It’s just absurd and not funny.”