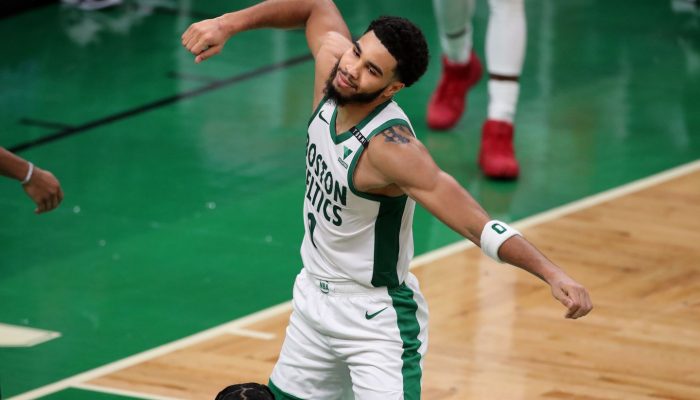 Even if you aren’t a huge sports fan, you’ve probably heard of the Celtics or star player’s like Larry Bird, Paul Pierce, and many more. The Celtics have always been a powerhouse team with standout players each year but have fallen short of a championship since their last in 2008. This year, young stars Jaylen Brown and Jayson Tatum were both chosen to play in the All-Star game and the three point contest. As well as these two, the Celtics have veterans in Marcus Smart and Kemba Walker as well as  standout bench players Robert Williams and Payton Pritchard.

The Celtics started out the season strong. Although Walker, who was supposed to be a great player for the Celtics, struggled to get on track after his season was delayed due to his injury from the previous playoff run at the end of 2020. Walker is now averaging 18.5 points a game, 3.6 rebounds and 4.6 assists and seems to be a plus for the Celtics rather than a problem.

The Celtics top defensive player, Marcus Smart, is currently out with a left calf strain. Marcus is one the scrappiest and toughest players in the NBA. Although he has only averaged 13.1 points a game he has played a major role in the Celtics success as their overall leader. The last time Smart played was January 30. Since then, the green have clearly struggled. February 21 began the three game losing streak. They lost against New Orleans, then lost to Dallas two days later, and lost to Atlanta the day after that. The Celtics needed to change something to get their groove back. On February 26, they won against Indiana and are currently on a four game winning streak.

Although they are missing their top defensive player and leader Smart, they have their three standouts, Tatum, Brown and Walker. But Robert Williams has been another major part for the Celtics success. Williams leads the Celtics in blocked shots and has the highest field goal percentage of 72.1 percent. Williams is only 23 years old and has already made a huge impact on the team. He may only score an average of 6.9 points per game, but when he shoots, he rarely misses. A lot of his contributions are thanks to his athleticism and defensive prowess that only gets better and better.

So what do the Celtics need to do to stay consistent and have a shot at the playoffs? It has already been stated that head coach Brad Stevens will not be going anywhere until it is decided he is no longer a good fit for the team. He has been a consistent coach for the Celtics and will have to switch some things up to get more wins.

What else? They need to utilize their trade options. The Celtics currently have a $28.5 million traded player exception which is the largest in NBA history. This is at their disposal until the trade deadline of March 25, which is approaching fast. There is nothing to say that the Celtics will even utilize this TPE before the deadline, but the full exception does not expire until November so there is a high possibility that they could wait to see if there are better players available over the summer. Another major factor for the Celtics? Change up thelineup. The starting lineup currently consists of Walker, Tatum, Brown, Daniel Theis, and Tristan Thompson. Brown, Walker, and Tatum are all ball-dominant players and the Celtics need to decide who will run the offense.

So will the Celtics have a shot at the playoffs? Only time will tell. For now they seem to be in a groove as well as Tatum and Brown making their mark in the All-Star Game.