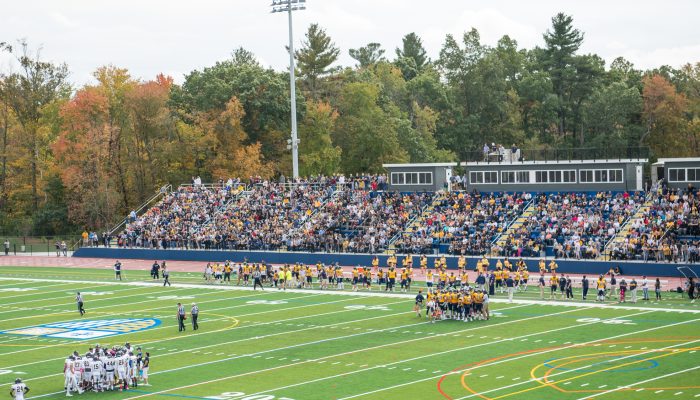 NORTH ANDOVER, Mass- Merrimack College is one of ten collegiate schools, in the North East Conference that has made the tough decision to cancel the fall sports season. The driving factors in the closing were not only to ensure the safety and prosperity of their athletes but the same for all of their students returning campus. From a broader standpoint, does a season without football effect more than just an athlete’s life? Has the “new normal” lifestyle changed the feeling of lacing your cleats up, to step onto Duane Stadium for practice every day? Are all lives affected one way or another from not being able to have a “getaway” in life anymore? Sports in general and the elements it brings into people’s lives is something that made this decision extremely hard, but Merrimack College and the NEC felt as if it was the correct decision to be made for the current situation we are all facing.

Trying to create a “new normal” to live in, but also attempting to get back to the activities we all love so much, was exactly what athletes across the U.S. had to deal with this year. For one football player at Merrimack College, life has been turned upside down. As he returns for his junior year of college after having a STANDOUT sophomore year between the hash marks, Johnny Rosario or better known as “Johnny Football” on campus, is Merrimack Football wide receiver one. I sat down with the six-foot-five wideout to talk about not only his return to football and campus this fall but also how the future is now panning out for his collegiate career and potential pro-career.

I asked Johnny right away “A season with no football, it’s a broad idea but how does that make you feel?”. As any other athlete could contest to, playing a sport for their entire lives and giving every ounce of effort, drop of sweat, and minute growing up to get to where they are today. It makes it pretty hard to just be told: “you’re not playing this fall” and having to accept it.  After playing for fifteen years of his life, there was no negative connotation or hatred from Johnny because of the situation not only him, but all people across the world are facing right now. Johnny said “it’s a weird feeling for sure not strapping up, but everything happens for a reason. This gives me more time to be able to focus on my craft and to get better”. Knowing he will lace up his cleats again one day, everything he is doing now is to ensure when that day comes, he’ll be back and better than ever.

After returning to campus with all of the other students, the idea of playing was on the table still. After the NEC decided to revisit the idea of the season beginning by October first, I asked Johnny “has this changed anything from workouts or practicing styles for you, since you have more time on your hands?”.  Just as everyone expected from Johnny Football he answered and said “I am taking my time more serious now, and I get to not only study the other teams out there but also myself. I get to perfect my skills now, after seeing all of the small flaws in my game”. The only semi-negative thing Johnny had to say about this fall and the “new normal” lifestyle all of us, and athletes have to follow was practice life. Not negative about being back on the field in his cleats and catching footballs again, but when I asked him “does wearing a mask and practicing in small groups take away the brotherhood aspect of football?”. Johnny responded “It’s big with a mask on you can’t tell if someone is smiling at the joke you made to them, and not being able to practice with the entire team anymore really takes away from the brotherhood aspect of football. I am just happy to be back and out here again though”.  I’m pretty sure anyone today would give anything to be with their families, friends, and “brothers” again. Johnny knows he is blessed to have everything kind of back in his life again, and the STANDOUT wide receiver will be back out on that field again soon.

The last question I had for Johnny Rosario during our interview was “obviously it is your junior year here at the Mack, I bet you wanted to have another dominant season on the field. Now since the season is in the spring do you expect to be on the draft radar still and go out and dominate on the field?”. Answering humbly and like a true professional Johnny said “I feel like I got to focus more on myself and become a better player for my team. That will translate to much more for me hopefully in the future”. Lastly, I said “I don’t think I am the only one excited for football to come back and get to see you guys hit the field again. What are we as fans expecting from Johnny Football out there when the Warriors take the field, a ten plus touchdown reception season?” …

“You know I will be doing my best and balling out whenever we get back onto the field not only for me and my team but for all of the fans as well”.

This is the hope we all need in a time like this. Trying to get through a tough fall semester battling a world-wide pandemic, and all trying to be the best at what we all do in our lives. If you would like to check out Johnny Rosario, Junior at Merrimack College, check out the attached links to see him in action (https://merrimackathletics.com/sports/football/roster/johnny-rosario/8986). We are all excited not only to just see Johnny out on the field again this spring but to get to see all of our Warrior athletes playing their beloved sports again! #RollMack